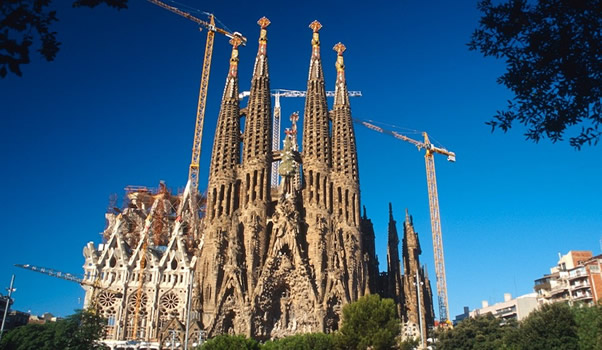 Final Work Phase Begins On The Tower Of The Sagrada Familia. image: flickr

Work began today, Tuesday 20, on the final phase in the construction of the Mare de Déu Tower of the Sagrada Familia, which entails erecting the shaft, or pinnacle of the structure, which, when completed by December 2021, will see the expiatory temple of Barcelona stand at an incredible 127m (416ft) high.

As Efe reports, the shaft, formed in a hyperboloid shape, starting off with six legs, and ending with three points, or support arms of the luminous star which will sit on top of it eventually, is the intermediate piece of the tower and will add another 11m (36ft) to the existing structure. Wooden formwork is now being put in place, and then the shaft, which is the longest piece at 10.8m (35ft) tall, will be lifted into position, concreted in place, and covered with the brittle, before the addition of the prefabricated piece of the upper third and in December, the tower, with the star, will be completed.

The shaft which terminates in the three points, will have its entire surface covered with ‘trencadís’, which is a Gaudinian technique for cladding structures that consists of the creation of a mosaic, generally abstract, through irregular pieces of ceramic, glass or marble of white and blue tones.

Sitting atop of the structure will be a giant star which is 6m (20ft) high, and with a diameter of 7.5m (25ft), made of stone, and will have 12 points, with all sides made of textured glass and illuminated from within.

The Fundación Junta Constructora de la Sagrada Familia signed an agreement with the Barcelona Tourism Consortium last Friday to jointly promote events related to the unveiling of the Virgin Tower, scheduled for December of this year, as reported by eldiario.es.