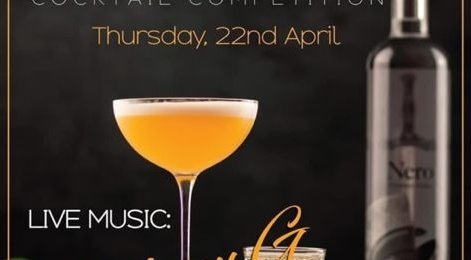 Nero Vodka Signature Cocktail Competition Showcase’s 10 Talented Flair Bartenders.
Award-winning Nero Vodka is sponsoring a signature cocktail competition at The Roka Bar Elviria this Thursday, April 22. Owner Andrew Foldi and his staff are very excited at the prospect of holding the event which starts at 2.0 pm and features ten of the Costa del Sol’s most talented flair bartenders that have been entered by Max Beach, La Sala, The Beach House and The Harbour to name just a few.
The judge’s panel consists of the legend himself, Mr Pedro García- Spanish Flair Champion, a NERO Vodka representative, and a member of the public. Compare at the contest is no other than one of the coasts top entertainers, Mr Johnny G, who will also be entertaining the audience from 4.30 pm with his live music show- not to be missed!
When everyone is set up and ready, the fun will start and the clocks will start to tick as each bartender only has 6 minutes to prepare 3 drinks for the judges. Here is what they must stick to if they want to claim the €200 prize money, there is a cocktail set for runner-ups too.
Competition Rules
At least 30ml of NERO VODKA must be used. The cocktail cannot have more than 6 ingredients.
Cocktails may be stirred, shaken, blended or over ice. Hot drinks are not permitted.
There are no regulations regarding the style of the cocktail, it may be in the category of long drinks, aperitifs, frozen cocktails, etc….
Any other ingredients such as purees, syrups, bitters, juices can be used- these ingredients can be either homemade or store-bought.
Decorations and garnishes must be edible and will not be considered as ingredients.
The Roka Bar is situated on C.C. Pinares, Elviria, Marbella, call 682 32 03 25 to reserve a table.
Pedro García is the Spanish champion of acrobatic cocktails and eighth in the world ranking for this spectacular speciality, known as “Flair”.
This barman, a native of Jaen, has developed his professional work as a flairtending teacher in different countries of the world such as the United Kingdom, Mexico, the United States or Canada. In fact, in recent years it has trained 1,500 students in about twenty different countries.
Flair
The flair is an acrobatic work style of bartenders that has been around since the 19th century, although the modern flair was born in the 70s, when bars began hiring in addition to bartenders, actors, comedians and street performers. Performing stunts with bottles, glasses and food soon attracted the attention of numerous customers. The flair became very popular around the world in the 80s of the 20th century thanks to the enormous success of the movie “Cocktail”, starring Tom Cruise.