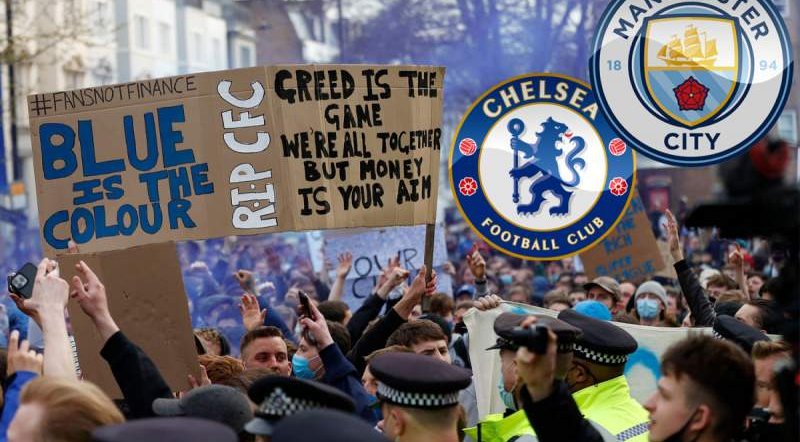 Manchester City has withdrawn from the European Super League (ESL) and Chelsea is now preparing to follow suit. The club’s efforts to leave come just two days after both were announced as two of six English clubs that were supposed to sign up to the controversial new competition.

While English team involvement has quickly been reconsidered, there has been no indication as yet from the other six clubs from Spain and Italy – which includes Real Madrid, Barcelona, Atletico Madrid, Inter Milan, Juventus and AC Milan – that they are considering doing the same- although rumours are circulating a few of the clubs are considering abandoning the idea altogether.

The European Super League has been widely criticised since being announced on Sunday, April 18. Around 1,000 fans gathered outside Chelsea’s Stamford Bridge home ground before their game against Brighton to protest their involvement.

Chelsea and City were part of English football’s ‘big six’ clubs – alongside Arsenal, Liverpool, Manchester United and Tottenham – to have agreed to join the new league.

In total, 12 European clubs announced their intentions to form the breakaway league, which they hoped to establish as a new midweek competition. It was condemned by football authorities and government ministers in the UK and across Europe by Uefa and leagues associations.

Chelsea were the first club to indicate they will not press ahead by preparing documentation to withdraw- City withdrew soon after. Chelsea and City were not drivers of this plan, they were the last to sign and according to reports feared being left behind.

The decision to try and have Chelsea leave was taken by owner Roman Abramovich and the club’s board after witnessing the highly negative global reaction to the Super League.

There was a fear that it could do reputational damage to the club and undermine some of its campaigning and community work. Questions had been raised internally as to whether fans would respond to the club if it continued with a proposal that has gone down so badly.

Earlier in the day, UK Prime Minister Boris Johnson met with the Football Association, Premier League officials and fans’ representatives, after which the government said it will take “whatever action necessary”, including legislative options, to ensure the proposals were stopped.

A statement released after a meeting between the Premier League and the 14 clubs not involved said they “unanimously and vigorously” rejected plans for the competition.

It added that it is considering “all actions available” to stop the competition and asked the six teams to end their involvement immediately.