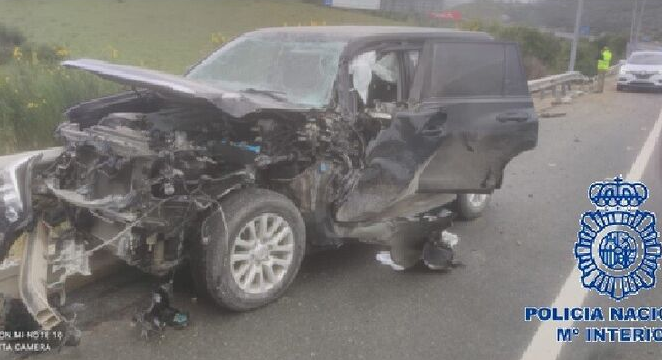 Three drivers on the run caused a violent car crash in a police chase in Estepona.

OFFICERS of the National Police have arrested occupants of three high-end vehicles that were stolen in different locations in Estepona, with one ending in a violent crash. A police team was initiated to intercept the stolen vehicles when the first car was detected on the AP-7, in the direction of Algeciras.

The provincial police station reported in a statement that the SUV collided violently with a lorry that was travelling on the same road. Two other vehicles were then detected, and their drivers were detained.

The event happened on April 9 on the AP-7 highway, when plainclothes officers from the Estepona Local Police station detected a high-end SUV that was making a sudden manoeuvre in the middle of the road. When they looked into police databases it turned out the SUV was stolen in the town of Alcobendas (Madrid), a tracking device was set up to intercept them and a car chase ensued.

During the police operation, the officers detected two other stolen vehicles, of identical characteristics and thought to be related to the previous one, which was circulating on the AP-7 in the same direction.

During the interception of the vehicles, one increased its speed to exceed 200 kilometres per hour and officers attempted to catch it at the Manilva toll. The vehicle, realising police were on their tail, ignored the signals and hit the toll barrier continuing their escape.

National Police explained that the patrols continued with the persecution for another 30 kilometres until the vehicle lost control and violently hit a lorry. The occupant attempted to escape on foot, although the officers caught up with him and arrested him. Both the detainee and the lorry driver were not seriously injured.

Meanwhile, at the AP-7 tollbooth, the second of the stolen vehicles was intercepted by a uniformed patrol, the driver did not resist his arrest. The last of the SUVs was blocked at kilometre 138, and that driver was also arrested. The three detainees, aged between 23 and 43, were brought to justice.

The three vehicles were allegedly stolen in the same week in different municipalities of Madrid. It is presumed they were stolen by criminal organisations.