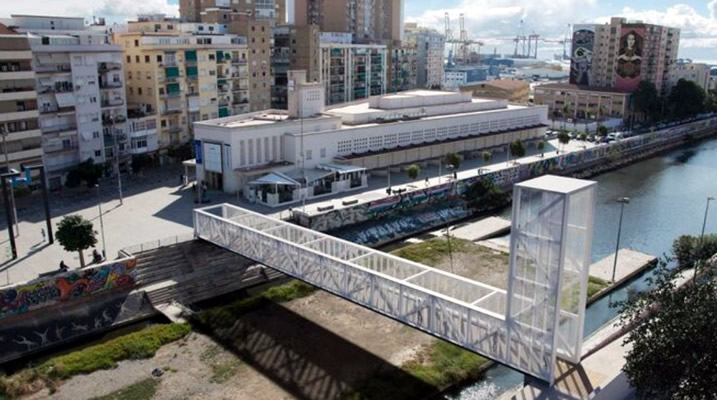 Work To Start On Malaga’s New Centre for Contemporary Art Bridge after two years without a bridge.

THE original bridge of the Centre for Contemporary Art (CAC) in Malaga was closed almost two years ago after falling into a state of disrepair, which saw it eventually get demolished one year later, and then finally, the contract to construct a new bridge on the same site was approved last November, but works did not start.
Raúl López, the Malaga councillor for Land Management, announced on Monday April 19, that modified plans had been completed, and that work on the new structure will begin in May.
It would appear that analysis of the site by technicians after the previous bridge had been demolished, determined that the remaining height of the abutments was not as expected, and led to the delayed start of construction while starting last December 23, modifications were made to the design and structure of the new bridge.
Mr López said, “As of today, this project is being completed, which will facilitate access,” and believes that by summer the bridge will be a reality, or will at least be well underway to completion, with a joint effort by two companies, Construcciones Garrucho and Tevaseñal, on the €404,991.26, project that has a three-month completion period in the contract.
A new trend in urban design has led to the post-tensioned reinforced concrete design of the old bridge being changed to incorporate metal trusses, and including an exterior covering of a double perforated aluminum skin that surrounds the metal trusses, designed for the infrastructure to have “a certain sculptural character, which will generate a synergy with the CAC,” as reported by malagahoy.es.
The Euro Weekly News is running a campaign to help reunite Brits in Spain with their family and friends by capping the costs of PCR tests for travel. Please help us urge the government to cap costs at http://www.euroweeklynews.com/2021/04/16/ewn-champions-the-rights-of-brits-in-spain-to-see-loved-ones-again/