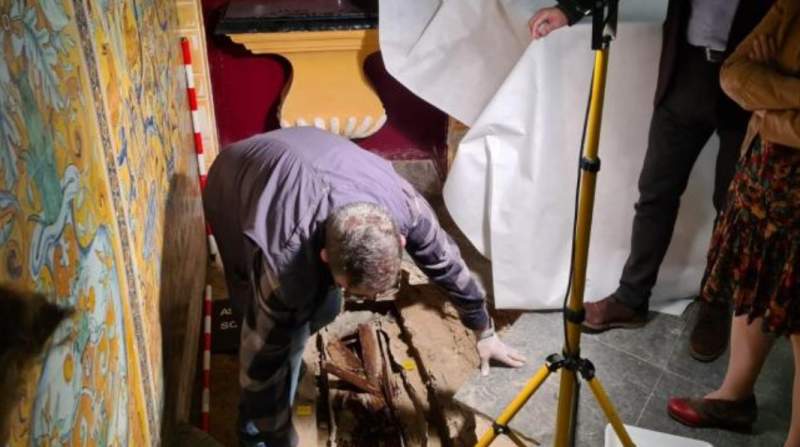 Archaeological works that are being carried out in the Chapel of the Gothic Palace of the Real Alcázar of Seville to restore its ceramic tiles have uncovered a small lead sarcophagus underneath the floor of the main altar of the Virgen de la Antigua, containing a wooden coffin with the well-preserved remains of what is thought to be a five-year-old girl.

The team of archaeologists, led by Miguel Ángel Tabales, along with the anthropologist, Juan Manuel Guijo, and the curators of the monument have conducted an analysis of the remains and have come to the conclusion the body is from some time around the Middle Ages.

Antonio Muñoz, the councillor of Urban Habitat, Culture and Tourism, accompanied by Isabel Rodríguez, the director of the Real Alcázar, both witnessed the opening on Tuesday 20 of the sarcophagus that, if confirmed, could have about seven centuries of history.

“At the moment, they are hypotheses that are being considered, and also framed in the theory of Professor Tabales that there could be a crypt under the Royal Chapel of the Gothic Palace”, said Mr Muñoz, “But, for now, prudence must prevail until the appropriate studies are carried out to determine the chronological assignment and, therefore, the possibility of identifying the character”.

Adding, “There is still much to do, but from here I want to congratulate the team of archaeologists and curators of the monument for the precision of their work and the ability to react to findings of this magnitude”.

The skeletal remains are reportedly in a relatively good state of preservation, and the skull contains the hair of the minor, along with the remains of the burial clothing, fabrics, shoes, leather and mother-of-pearl buttons, and their hypothesis is that the child belonged to a very prominent family, as reported by sevilla.abc.es.