Spain Reports An Increase In Illegal Immigrants Of 21% This Year 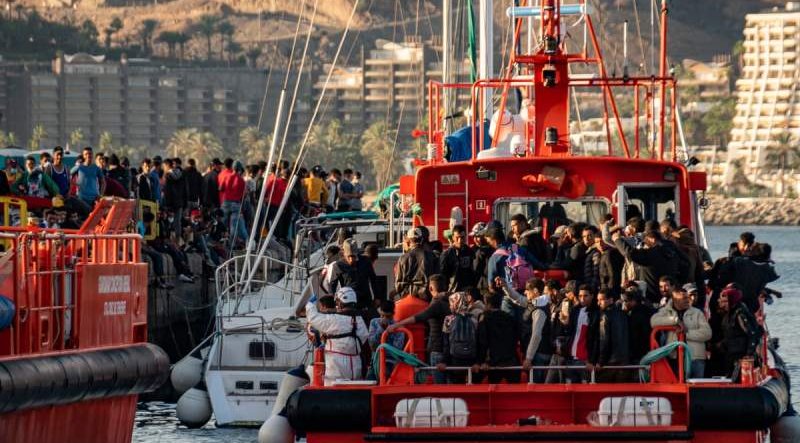 Spain Reports An Increase In illegal Immigrants Of 21% This Year. image: Wikimedia

Spain Reports An Increase In Illegal Immigrants Of 21% This Year.

Illegal Immigrants arriving on Spanish shores this year have increased by 21% since January compared to the same time last year. According to data from the latest available report from the Ministry of the Interior, between January 1 and April 15, 7,175 people entered the country irregularly, 1,200 more immigrants than in 2020- the year that marked the start of the coronavirus pandemic.

The figure is close to – although still below – the one registered at the start of 2019, when, even without the Covid crisis, a total of 7,516 people had reached Spain, setting a historical maximum. In the previous two years, entries by sea or land were around five thousand: in 2018 there were 5,378 arrivals and in 2017, 5,003.

The largest increase in entries in 2021 have been registered by sea in the Canary Islands. As the report from the Fernando Grande-Marlaska department shows, in the first four and a half months this year almost 4,000 people have arrived, more than double that of last year, when 1,770 had entered, 125% less. The number of boats has also grown, rising from 60 in 2020 to 111 this year, an 85% increase.

The coronavirus pandemic of course greatly influenced last year’s figures, especially during the first months of 2020. As restrictions were lifted, the figure grew to 16,720 people throughout the year. This caused a humanitarian drama in the islands. As the principal investigator of the Elcano Royal Institute, Carmen González, said, the pandemic had thrown many young Africans into poverty, “who see themselves without any hope of surviving in their country” and chose to embark on the dangerous road to Europe.

The total for 2018 is much higher than the 39,180 arrivals registered in 2006, when there was a spike in the number of boats landing on Spanish coasts, most notably in the Canary Islands. At the time, the wave of arrivals was dubbed “the cayuco crisis,” named after the makeshift vessels used by the migrants.

Spain the main gateway into Europe for irregular immigration from Africa, with figures far surpassing Italy, Greece, Cyprus and Malta. The closed-port policies introduced by Malta and Italy, together with the agreement between the EU and Turkey, has made Spain the most attractive option, if not the safest. Last year marked a record in deaths and missing migrants, 769, a significant rise from the previous high of 631 in 2014, according to IOM data.

A Canary Islands Judge recently passed an order that prevents police from stopping illegal immigrants flying to mainland Spain. The order, given to the Higher Police Headquarters of the Canary Islands, states that if a person has documentation such as a passport/identification etc and has applied for international protection, then he or she should be allowed to leave the islands.

This is the first time a judge has ordered a police force to allow the transit of immigrants who have entered Spanish territory illegally as long as they carry the necessary documentation.