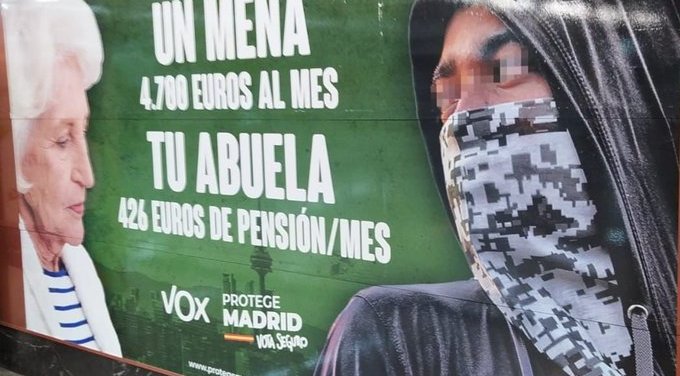 Far-right Spanish political party Vox has been slammed for its portrayal of illegal immigrants in its latest campaign poster ahead of the May 4 elections in Madrid. The new billboard features a picture of an elderly woman and a young man wearing a bandana with the words €4,700 a month for a mena. €426 a month for your grandmother’s pension,” followed by a smaller caption reading “Protect Madrid.”

Mena is the term commonly used to describe an unaccompanied foreign migrant minor in Spain, and is often used in a derogatory manner in reference to younger illegal immigrants in the country. Now, several politicians including the Spanish Equality Minister, Irene Montero, have lodged formal complaints against Vox, accusing them of a hate crime.

The campaign billboard naturally sparked a huge debate in the Congress of Deputies on Wednesday, April 21, with Vox defending the use of the posters in order to draw attention to the flaws in public spending in Spain. Spokesperson Iván Espinosa de los Monteros argued that while the government claims that there is not enough money to go around, there is plenty “to maintain menas and illegal immigrants across Spain.”

Deputy Prime Minister Carmen Calvo replied that “what you’ve done with those signs, pointing at boys and girls, at minors who come to our country, sometimes fleeing terrible situations, without families, having been victims of very serious crimes during their journeys – that’s called inhumanity, hatred.”

According to the Madrid Department of Social Policy and Family Affairs, the poster completely skews the facts, as it leads passengers in the Madrid train station of Puerta del Sol to believe that thousands of euro are being handed out to foreign minors on a regular basis. In fact, the department argued that up until March 31 of this year, foreign national minors arriving unaccompanied in Spain accounted for only 7.2 per cent of the total number of youngsters under the guardianship of the Madrid regional government.