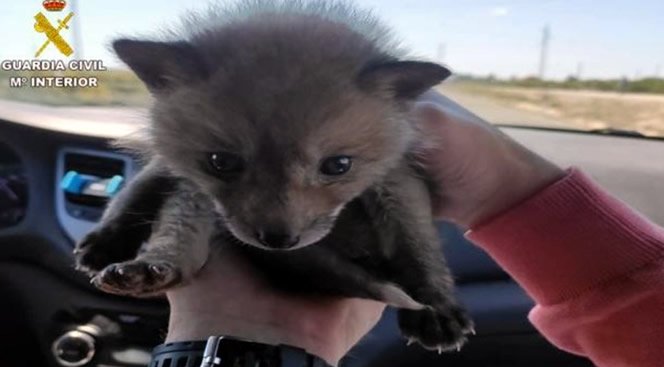 Officers from the Guardia Civil’s Seprona squad in Alicante have rescued a baby fox cub that had been advertised for sale on a popular second-hand items website.
After the advert for the sale of the cub at €550 was reported to Seprona, their Nature Protection Service officers initiated an investigation on April 6, to determine if there was actually such an animal available for sale, and if so, to trace the person selling it, and arrest them.
Enquiries made through contacting the seller online established the cub was that of a common fox (Vulpes vulpes) barely a month old, and in doing so, managed to trace a person in Alicante, and arrest them, which led to the subsequent arrest of another person in the town of Pinoso, who had captured the cub originally, and sold it to the first detainee. 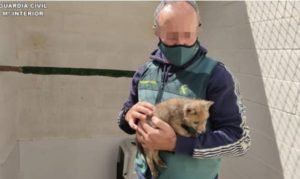 Under questioning, the hunter revealed that he had also simultaneously hunted and captured two other fox cubs, but he could not reveal what had become of them.
The hunter is guilty of infractions of the Hunting Law and the Law of the Biodiversity and Natural Heritage, and he could also be found guilty of constituting an alleged crime relating to Flora, Fauna and Domestic Animals, and a report has been sent to the Environmental Coordinating Prosecutor’s Office.
The rescued fox cub was placed in the safe hands of the Santa Faz Species Recovery Center, in Alicante, while the Seprona officers continue their investigation to discover the fate of the other two cubs, and the online seller of the cub will go before a judge in the court, as reported by lasprovincias.es.
The Euro Weekly News is running a campaign to help reunite Brits in Spain with their family and friends by capping the costs of PCR tests for travel. Please help us urge the government cap costs at http://www.euroweeklynews.com/2021/04/16/ewn-champions-the-rights-of-brits-in-spain-to-see-loved-ones-again/