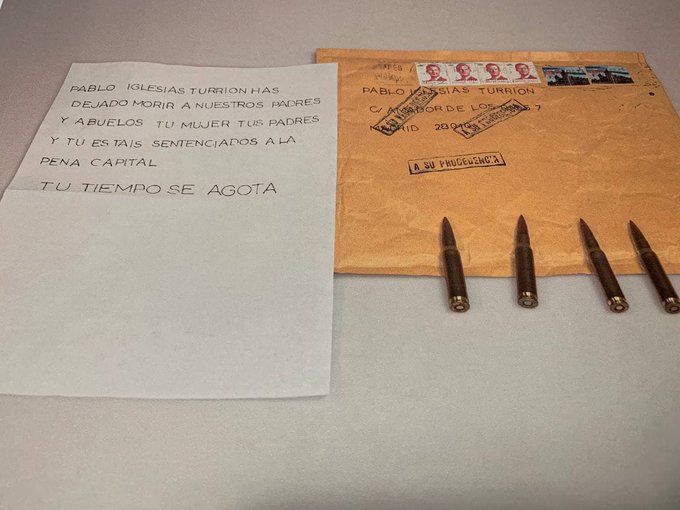 DIRECTOR of the Guardia Civil in Spain, along with several politicians, receives death threat letter with bullets.

Several senior officials in Spain have received threatening letters along with unused bullets this week in what appears to be a coordinated attempt at intimidation. The Minister of the Interior, Fernando Grande-Marlaska, the leader of United We Can, Pablo Iglesias and the general director of the Guardia Civil, Maria Gamez, all received the poisoned pen letter within a few hours of each other, as reported by Spanish daily La Sexta.

Candidate for the upcoming Madrid elections on May 4 Iglesias took to Twitter to show the letter he received, along with two rifle shells. The sinister note read:

“Pablo Iglesias Turrión you have let our parents and grandparents die. Your wife, your parents and you are sentenced to capital punishment. Your time is running out.”

Official sources report that security has been tightened around Iglesias in recent weeks as authorities fear he may be at risk in the run up to the coming elections.

Grande-Marlaska was the first to report the hate mail when he received it on Thursday morning, April 22, and the head of the Guardia received the exact same letter around the same time, together with two cartridges for different weapons. Their letters read:

“You have 10 days to resign. The time to laugh at us is over. National Police, Guardia Civil. Time is against you for the pops.”

The notes, which were postmarked April 19, and bullets have been sent to the Scientific Police General Commissariat for technical analysis.

President Pedro Sanchez has spoken out against these acts of passive aggression, sending a message of “emphatic condemnation of the serious threats received” against “political leaders and public servants.”

“In the face of threats and violence, justice and democracy,” he concluded.