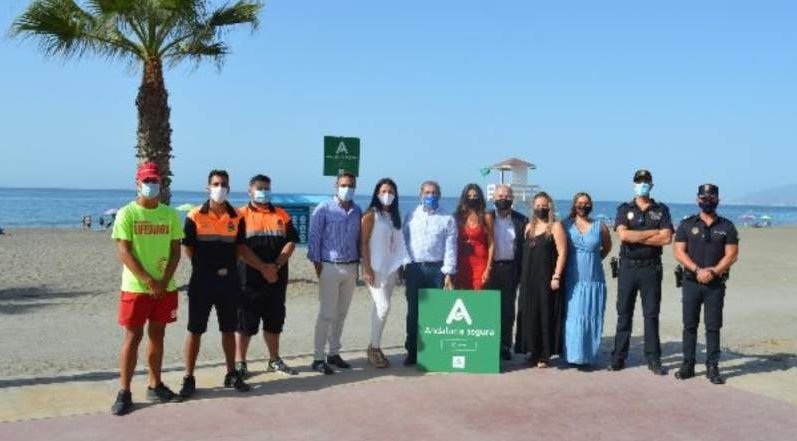 RINCÓN DE LA VICTORIA’S Beaches Receive Málaga’s ‘Safe Andalucía’ Sealfrom the Ministry of Tourism
Nuria Rodríguez, the representative of the Junta de Andalucía in Rincón de la Victoria, announced today, Friday 23, that from June 8, the beaches of the community have been awarded the ‘Andalucía Segura’ (Andalucía Seal), joining almost 70 other beaches on the Málaga coastline that already have the distinctive label awarded by the Ministry of Tourism, Regeneration, Justice and, Local Administration.
Presently, 60 per cent of Andalucía’s beaches – which equates to 68 beaches in ten municipalities – bear this seal, four in Fuengirola, Manilva has eight, Benalmádena 17, two in Algarrobo, Nerja has 15, Torrox six, eight in Vélez-Málaga, Casares has four, in Mijas there are three, and now, Rincón de la Victoria as well.
“This badge confirms that Andalucía and the province of Málaga are safe and quality destinations. Now security is key to reactivating tourism after the paralysis caused by the coronavirus pandemic, and ‘Andalusia Segura’ is going to give that tranquility that tourists are looking for”, said Ms Rodríguez.
Antonio Fernández, the mayor of Rincón de la Victoria, added, “the reception of this new distinction, places the beaches of our coast in a position of quality and optimum safety, for the enjoyment and the tranquility of our neighbors and visitors”.
He continued, “we are generating that same confidence for the rest of the businesses and services of the municipality in a commitment to our commercial and business sector, such as the provision of financial aid for SMEs and the self-employed to promote activity”.
To obtain this seal, which is voluntary and free, each town hall must present a request to the Provincial Delegation containing their contingency plan for each beach, along with a declaration of the responsible measures that they intend to implement relating to the coronavirus protocols laid out by the Junta de Andalucía, the Ministry of Health and the World Health Organization, as reported by diariosur.es.
The Euro Weekly News is running a campaign to help reunite Brits in Spain with their family and friends by capping the costs of PCR tests for travel. Please help us urge the government cap costs at http://www.euroweeklynews.com/2021/04/16/ewn-champions-the-rights-of-brits-in-spain-to-see-loved-ones-again/