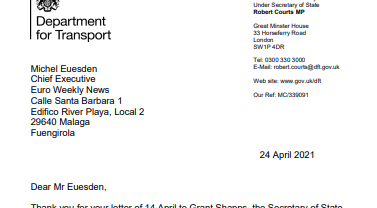 THE UK government has written to the CEO of the Euro Weekly News, Michel Euesden, following her letter calling for a price cap on the cost of PCR tests.

The government in the UK wrote to Michel following her letter urging them to cap costs of PCR tests so that Brits in Spain could so their loved ones again.

After writing to the Department for Transport, EWN’s CEO Michel Euesden today received a reply from the UK’s Minister for Aviation, Robert Courts MP announcing plans for the government to help lower PCR test costs.

Writing to Michel Euesden, the minister said: “I am sorry to hear that the cost of PCR tests has caused concern for the readers of your newspaper.”

He added: “The Government recognises… that the cost of these tests can be high. 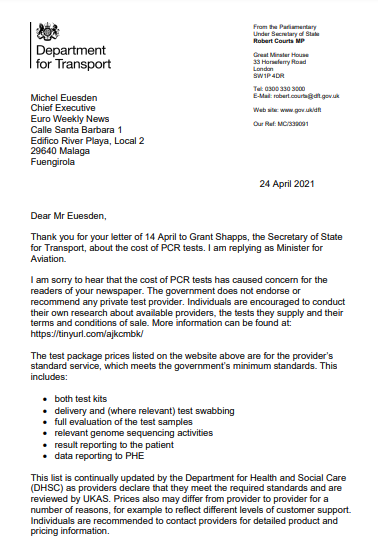 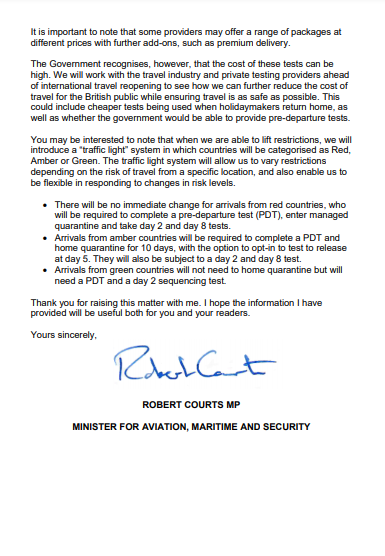 “We will work with the travel industry and private testing providers ahead of international travel reopening to see how we can further reduce the cost of travel for the British public while ensuring travel is as safe as possible.

“This could include cheaper tests being used when holidaymakers return home, as well as whether the government would be able to provide pre-departure tests.”

Responding to Michel’s concerns raised in her letter that the price of UK PCR tests can reach £214 (€245), Mr Courts added information to help travelers find the cheapest tests.

He said: “Individuals are encouraged to conduct their own research about available providers, the tests they supply and their terms and conditions of sale. More information can be found at: https://tinyurl.com/ajkcmbk/.”

The minister thanked Michel for her letter, saying: “Thank you for raising this matter with me. I hope the information I have provided will be useful both for you and your readers.”

The letter from the UK government came after the EWN’s campaign to lower costs, which saw Michel last week write to the Department for Transport urging them to cut the costs of PCR tests so Brits in Spain could afford to see their loved ones again this summer.