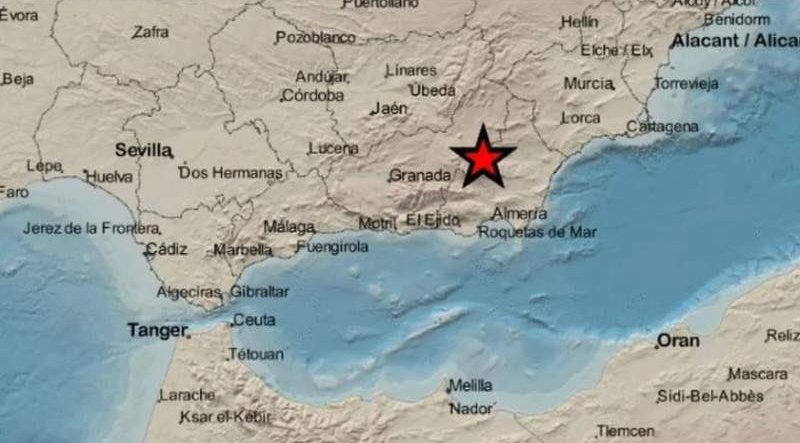 SERON QUAKE: 2.5 on the Richter scale but not material damage Photo credit: IGN

Mild tremor SPAIN’S National Geographic Institute registered a 2.5-magnitude earthquake with an epicentre located two kilometres below Seron where it was noticeable but caused no material damage. Residents in both Alcontar’s Hijate neighbourhood and Tijola later reported that they had also felt the tremor that occurred at 11.30pm on Thursday, April 22.
Hooked up THE Policia Nacional revealed recently that during their operations to combat marijuana-growing clans and groups, they also encounter more than 200 illegal electricity hook-ups each month.  Defrauded energy companies are not the only victims, police pointed out, as the improvised power connections can cause countless power cuts and even fires.
Lucky number GOOD fortune smiled again on Almeria City with a first prize of €600,000 for every 10-coupon ticket in last Saturday’s National Lottery draw.  The winning number 26,541 from the lottery agency in Calle La Pilarica, was also sold in Jaen, Las Palmas, Madrid, Leon, Orense and Valencia.
High-flyer PILAR MARTINEZ-COSENTINO ALFONSO was named one of Spain’s 100 Leading Women by Mujeres&Cia, a Spanish platform that represents professional women and executives.  Mujeres&Cia also ranked Martinez-Cosentino, who is the deputy vice-president of the Cantoria-based multinational marble company Cosentino, amongst Spain’s highest-rated 10 businesswomen.
London job POPULAR disc jockey from Garrucha, Kamal Mkasry who is better known as Moree Mk, embarked on a new stage in his career after moving to the UK last December. As soon as restrictions are finally lifted there, he will be resident DJ at a London club, he revealed.
Helping hand THE Almeria branch of Andalucia’s Institute for Women (IAM) attended to 12,686 enquiries last year, 940 more than in 2019.  A quarter of the women who were seeking advice needed help for issues that were related to gender violence, a 14 per cent increase on the previous year.
Road safety THE El Cañarete road, closed since last September, will open to traffic in June, the central government’s sub-delegate to Almeria announced.  He realised that “thousands” were anxious to use the road, Manuel de la Fuente said, but stressed that safety had to take second place to convenience.
Water war REDUCING by almost half the amount of water that reaches Almeria from the River Tajo has been blamed on politics.  The president of the Junta Central de Usuarios del Almanzora irrigation syndicate complained that the reasons cited by the Environment Ministry “were political, not technical, financial or social.”