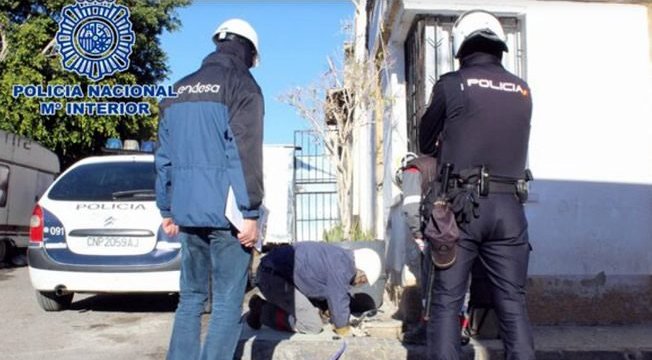 During the first quarter of 2021, the National Police of Almería and El Ejido, in a joint effort involving the electricity provider, Endesa, has uncovered almost 700 illegal and fraudulent electricity connections in properties in the region.
It is known by these two entities that the cultivation and manufacturing of marijuana indoors needs light, temperature and humidity conditions for their proliferation that can only be achieved artificially, and the criminals involved in this activity are usually found to be connecting illegally to existing electricity lines in order to get a free supply to power the large amount of heating and lighting needed.
Properties with illegal connections can overload the supply lines by pulling too much power from the grid, and in some cases, it can prove very dangerous, with some properties know to have had fires as the result of an overload.

Between January and March 2021, officers from the Almería National Police conducted 40 house searches, concentrated mainly in the neighborhoods of Pescadería, Quemadero, Almendros, Puche, or Torrecárdenas, while officers from El Ejido carried out 6 searches, mostly in Pampanico, Las Norias, or the Llanos de Vícar.

A total of 95 officers took part in the anti-fraud operations, accompanied by technicians from Endesa, with 685 illegal connections being found, and all searches are the result of a preliminary extensive investigation by the police.
Every search is accompanied by a judicial order issued by the Administration of Justice, to enable the officers to legally enter any property they suspect of carrying out a criminal or illegal activity, as reported by diariodealmeria.es.
The Euro Weekly News is running a campaign to help reunite Brits in Spain with their family and friends by capping the costs of PCR tests for travel. Please help us urge the government to cap costs at http://www.euroweeklynews.com/2021/04/16/ewn-champions-the-rights-of-brits-in-spain-to-see-loved-ones-again/