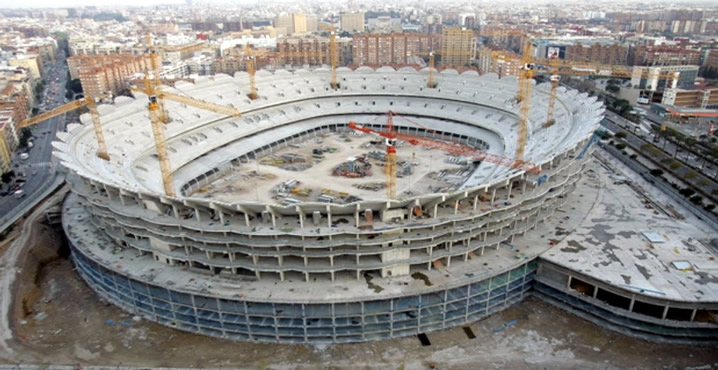 Ximo Puig, the president of the Generalitat and secretary-general of the PSPV, on Saturday 24, after presiding over the PSPV National Committee, spoke to the media about the pending construction works of Valencia CF’s new Mestalla football stadium, as well as the demolition of the Exposition neighbourhood.

Referring to the extension of the Strategic Territorial Action (ATE) that has been requested by the football club, he insisted that Valencia CF, “has to fulfill the commitments derived from the past, and everything agreed in the law, because this is the only way”.

On Friday, Enric Morera, the president of Les Corts Valencianes, claimed to be aware that the property of Valencia CF can present a request to the current Strategic Territorial Action (ATE), for aid towards the construction of the New Mestalla.

Sandra Gómez, the deputy mayor of Valencia, and mayor of Urban Development, said that her council would “study and respond” when valencia CF presents such a document, “if it exists”, refusing to comment more on “an alleged announced report by Morera, and of which I do not even know the content”, adding that, “the president of Les Corts does not work either in the City Council or in the Conselleria”.

Puig said he wished Valencia CF “the best possible, because “it is much more than a football club for society”, but, he insisted that, “the law must be followed to comply with everything agreed. It seems to me that it is the way, because the only possible way is compliance with the legislation”.

When asked to comment on the document to which Morera was referring, Puig said that he had no proof of its existence, adding, “I hope that action is taken by those who correspond and fulfilling the commitments derived from the past”, as reported by lasprovincias.es.