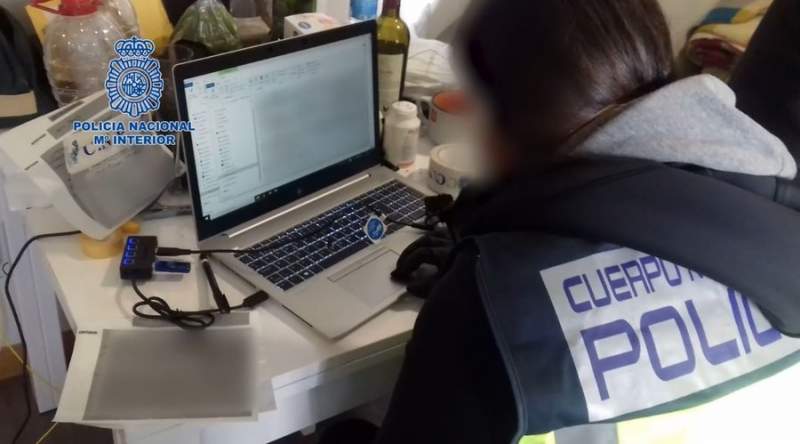 The National Police have arrested a couple from Elda in Alicante that operated an aesthetic center. The couple filmed about a hundred clients undergoing hair removal treatment in the genital area- naked from the waist down.

Some of the victims, including minors, were also touched and were told it was part of the waxing procedure. Police have arrested the couple who were in possession of more than 500 videos of clients. They are accused of alleged crimes of sexual abuse and production, distribution, and possession of child sexual material.

Both arrested are Spanish Nationals and in their 50s, they are on bail after appearing in court number 2 of Alicante. The couple had apparently also been arrested back in 2019 for possession of child pornography.

According to police sources, the complaint that led to the couple’s arrest came from the United States. One of the social platforms or associations that fight against the dissemination of child pornography alerted US authorities, who forwarded the complaint to the Minors Protection group of the General Police Station in Madrid- through the US Embassy.

According to the investigation, a Spanish user had been detected who had uploaded several pictures and videos to a platform that showed minors being subject to sexual abuse.

The agents discovered the IP address of the computer from which the connections had been made and tracked it down to an address in Elda, a city of just over 50,000 inhabitants located about 30 kilometers from Madrid.

It was then that the case was taken over by the judicial group of the National Police in Alicante, which sent several officers to the suspects’ homes.

The search revealed the presence of numerous files related to the sexual exploitation of minors, which turned out to be of a particularly degrading nature for the victims, said the police.

In addition, three hard drives were found with more than 500 recordings captured by hidden cameras consisting mainly of women and adolescent girls (there were also some men among the victims) who came to the clinic hair for removal treatment. Some of the videos last up to five hours, said the National Police.

According to the recordings, there were at least two hidden cameras placed in the treatment room.

One of the cameras gave an overhead view and was hidden in a ventilation grille, the other one was a “spy camera pen” device, say the agents, which was placed them on the same beauty treatment bed where the clients lay down and gave a frontal and detailed view of the victims’ genitalia without them noticing.

Some of the victims were also subjected to sexual abuse, in the opinion of the police, since the arrested woman, who was the one who carried out the treatments, “massaged the genitals” of her victims for several minutes with the excuse that it was part of the hair removal treatment.

According to police, the detainees had been recording their victims from at least 2012, when they worked in a foreign clinic that had to close for financial reasons that have nothing to do with the case.

Later, they moved the business to their own home, where clients went without suspecting that their images were going to be streamed on the internet. The investigation has managed to identify 83 different victims, some of them adolescents. After their arrest, the two alleged assailants went to court and testified before the judge. Both have been released on bail pending trial.