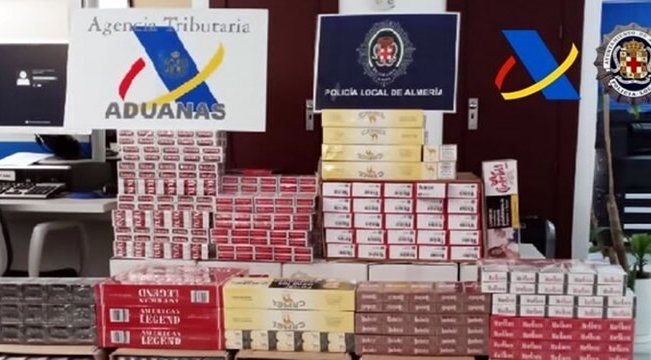 A joint operation between the Local Police and Customs Surveillance Service of the Tax Agency in Almería, has dismantled a contraband tobacco business that been operating out of a house in the Pescadería neighborhood of the city, and arrested the person involved, José Francisco FL.
‘Operation Window’ entailed six months of surveillance and investigation by the forces involved, and resulted in a raid at six-thirty in the morning of March 31, when the detainee was just preparing to start his sales for the day, with officers seizing 13 cases of tobacco with around 6,500 packs of different brands of cigarettes, without any tax seals, packed in a passenger car and a van.
A surveillance operation had captured on film, images of this clandestine business, with residents being supplied with up to one hundred packs a day, at around €4 per pack, through the window of a house overlooking the street in the Pescadería neighbourhood, breaking the law by selling the packs without customs seals, not having any sales or sanitary licences, and of course not paying tax on the profits.
The seized tobacco goods have a street value of €30,000, and have been deposited with the Mediapost company, which specialises in the storing of contraband packs, while the police continue their investigation to try and identify the detainee’s accomplices and third parties involved in the supply of the goods.
Surprisingly, the sentence for this type of illegal activity is minimal, and after giving his statement to the judge, the detainee was released, as the offence is only classed as serious when the seized stash has a value of more than €12,000, with fines reaching to between 250 and 350 per cent of the value of the merchandise, as reported by diariodealmeria.es.
The Euro Weekly News is running a campaign to help reunite Brits in Spain with their family and friends by capping the costs of PCR tests for travel. Please help us urge the government to cap costs at http://www.euroweeklynews.com/2021/04/16/ewn-champions-the-rights-of-brits-in-spain-to-see-loved-ones-again/