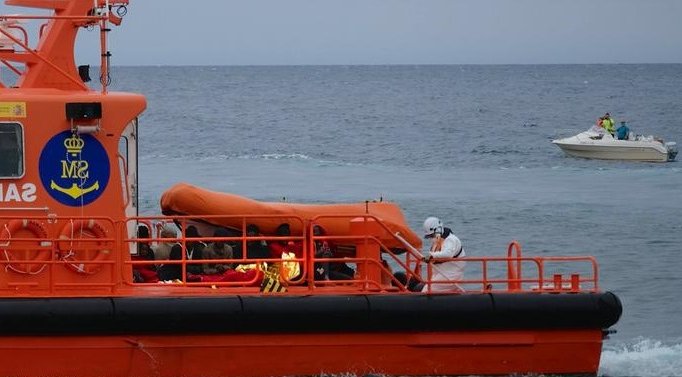 SEVENTEEN people were found dead in a migrant boat near the coast of the Canary Islands, the Spanish maritime rescue service reported on Monday, April 26. Three survivors, two men and one woman, were transferred by military helicopter to a hospital on Tenerife. “The three had hypothermia but were otherwise in good shape,” a spokeswoman for Spain’s local emergency services said.

The boat was first spotted by a passing Air Force plane, about 265 nautical miles from El Hierro. A spokeswoman from Spain’s maritime rescue service said that all migrants on the boat were sub-Saharan Africans, it was not immediately clear where the migrants had come from.

The Canary Islands archipelago is located about 100 kilometres from the Moroccan coast, and despite the danger of the journey, it has received a large number of African migrants since the end of 2019, coinciding with greater vigilance on the Mediterranean routes.

So far this year, as of March 31, 3,400 migrants have reached the shores of these islands. In the same period in 2020, they were less than half. Human rights groups have already warned that the Covid-19 crisis encourages the arrival of migrants. Among them are people who worked in tourism, fishing or other odd jobs in North Africa and who choose to cross the Atlantic, or to help others to do so with their boats, after having run out of money due to the economic collapse caused by the pandemic.

Spain Reports An Increase In Illegal Immigrants Of 21% This Year

Illegal immigrants arriving on Spanish shores this year have increased by 21 per cent since January compared to the same time last year. According to data from the latest available report from the Ministry of the Interior, between January 1 and April 15, 7,175 people entered the country irregularly, 1,200 more immigrants than in 2020 – the year that marked the start of the coronavirus pandemic.

The largest increase in entries in 2021 have been registered by sea in the Canary Islands. As the report from the Fernando Grande-Marlaska department shows, in the first four and a half months this year almost 4,000 people have arrived, more than double that of last year, when 1,770 had entered, 125 per cent less. The number of boats has also grown, rising from 60 in 2020 to 111 this year, an 85 per cent increase.