Woman reunited with ring lost amongst 350,000 tonnes of rubbish two years ago 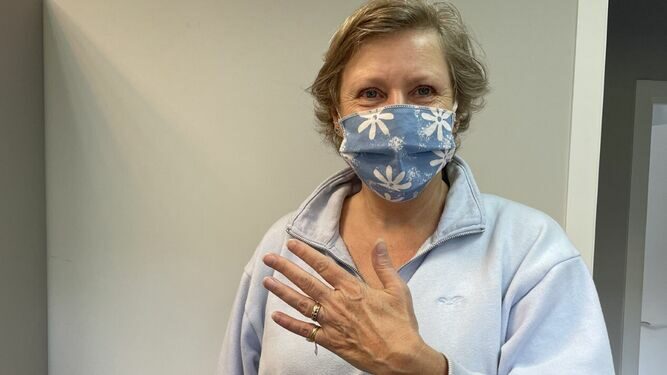 Woman reunited with ring lost amongst 350,000 tonnes of rubbish two years ago.

TWELVE months after losing a ring she bought with her first pay packet 30 years ago, Hellen Miles in EL Secadero, Casares, has been reunited with the “sentimental” piece of jewellery.
Hellen believed her three-colour gold ring had accidentally been lost rubbish thrown away in November 2018, but there was little she could do at the time.
However, in March 2019, the Costa del Sol Environmental Complex opened its Lost Property Office and she completed a lost property form online and provided photographs to prove ownership should she get lucky.
Incredibly, she did, and the tiny piece of jewellery was located and she is once again wearing it on her little finger.
“It is a ring that I bought 30 years ago with my first pay packet and it has a lot of sentimental value for me”, she said; while revealing how surprised she is “that such a small piece could have been located amongst the waste from the entire Costa del Sol”.
Councillor for Urban Solid Waste (MSW) for the Commonwealth of Municipalities of the Western Costa del Sol, Juan Luis Villalón, explained that “when a piece falls into the waste of a home, it can take months to be located; since these materials go through several processes”.
The complex apparently has machinery capable of locating items amongst more than 350,000 tonnes of waste that it annually manages at its facilities.
After remaining in the fermentation warehouses for eight weeks, the organic matter goes to the refining warehouse where glass and small pieces of metal, such as jewellery, are recovered, thanks to an induction separator and a large magnet.
These pieces undergo a cleaning process and a study to determine their authenticity and value.