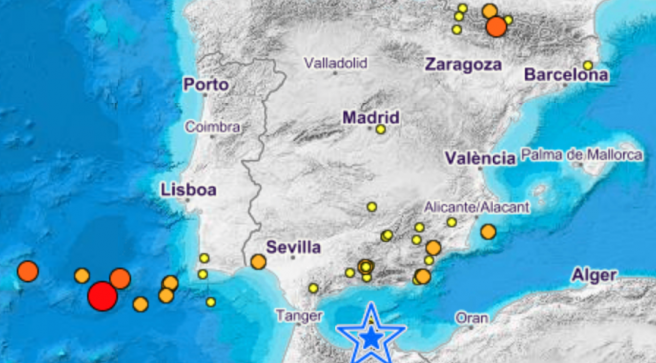 TWO earthquakes, one with a magnitude of four and another of 3.2 with an epicentre in the Alboran Sea were recorded this Wednesday, April 28, in Melilla, causing numerous aftershocks along Spain’s Costa del Sol.

According to information provided by the National Geographic Institute (IGN), the most powerful earthquake occurred at 2.40pm and was felt in Melilla with an intensity of grade III, although it was mild and only lasted for a few seconds.

It was also felt  further up the coast in the Andalucian towns of Malaga, Nerja, Vélez- Malaga and Torre del Mar.

Around two hours later, at 4.45pm, another second earthquake occurred in the same area, south of the Alboran Sea, with a magnitude of 3.2 and with the epicentre located 17 kilometres deep, this quake was also felt in Melilla (Melilla is a Spanish autonomous city located on the northwest coast of Africa) and recorded an intensity of two and three.

The Alboran area is still registering significant seismic activity and within the last few hours, there has been a multitude of aftershocks with magnitudes ranging between two and three also.

Melilla suffered at dawn on January 25, 2016, a strong earthquake, of magnitude 6.3, with an epicentre in the Alboran Sea which caused numerous damages to public and private buildings, in addition, about 30 people were injured.

Related:
Granada Shakes With Two More Earthquakes.
Earthquakes are common in southern Spain, the province of Granada was struck on Sunday, March 28 by two earthquakes, as reported by the National Geographic Institute (IGN), with the first one occurring at 9.01am, with its epicentre at Fuente Vaqueros, and a magnitude of 3.3 on the Richter scale.
It was felt at multiple points of the Fuenterino municipality as it was totally superficial, with movements reported not only in the capital of Granada, but in the following municipalities of the Metropolitan Area: Pinos Puente, Albolote, Atarfe, Armilla, Churriana de la Vega, Chauchina, Cijuela, Cúllar Vega, Las Gabias, Láchar, Peligros , Cenes de la Vega, Maracena, Pulianas, Santa Fe, and Vegas del Genil.
Source: 20 minutes