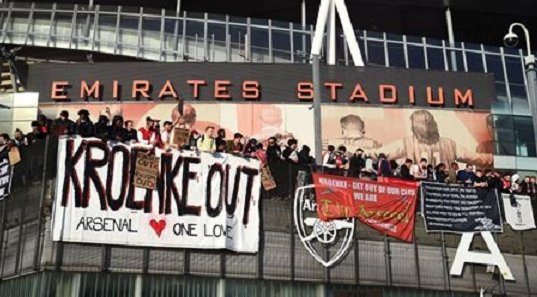 Spotify owner Daniel Ek is preparing to present a ‘very compelling offer’ to the Kroenke family to buy Arsenal football club. Swedish billionaire Daniel Ek is expected to submit a £1.8bn- €2.07bn offer to buy Arsenal in the next few days; current owners the Kroenke’s insist they will not sell the Premier League club following criticism over European Super League proposals.

Josh Kroenke, the son of Stan and a director at Arsenal, has insisted his family are not looking to sell the club. However, sources believe they could well be tempted by a bid of around £2bn – €2.30bn.

According to Forbes, Ek is worth £3.4bn – €3.91bn which now means that any bid for Arsenal may have to be as part of a consortium or with a partner.

Ek founded the music streaming service Spotify with Martin Lorentzon and, in 2017, was named as the most important person in the music industry by Billboard.

On Friday night, Ek’s message on Twitter read: “As a kid growing up, I’ve cheered for @Arsenal as long as I can remember. If KSE would like to sell Arsenal I’d be happy to throw my hat in the ring.” Speaking at a fans’ forum on Thursday night, during which he faced a backlash over Arsenal’s European Super League inclusion and withdrawal, Josh Kroenke said: “When are we going to sell? I am not willing to answer that question because we have no intention of selling.”

But Kroenke’s insistence Arsenal is not for sale is likely to be tested by relentless anger from supporters. Numerous banners held up on Friday said: “This is football, not soccer. You haven’t a clue. All you care about is money.” Another sign read: “Stop the Standemic”. The effigy of Kroenke was left hanging from a lamppost outside the stadium.