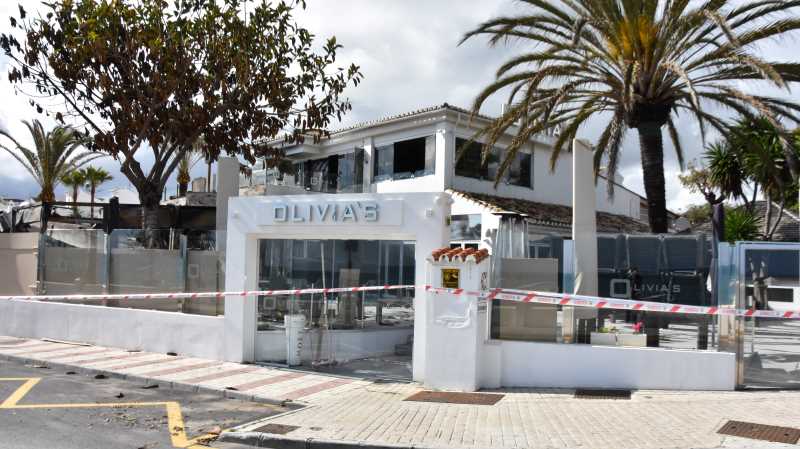 The aftermath of the fire

IT hardly seemed credible when news broke in the early morning of Monday April 26 that Olivia’s restaurant in Calle Torreon, La Cala de Mijas was on fire, but it was and within hours had been destroyed.
Emergency services attended the scene at around 5.30am and the fire took several hours to extinguish leaving the roof caved in and the interior of the building completely burned out.
For hours, celebrity owner Elliott Wright and his staff were unable to enter the scene until such time as it was safe to do so and once, he was able to get in, he managed to secure the CCTV security footage showing that the fire was deliberately started and this evidence has been handed over to the police to investigate further.
Speaking to Euro Weekly News, Elliott, who is understandably overwhelmed by the event said “We have the scum bags on camera and the police are actively seeking these people.”
He went on to say that whatever happens “I’m already planning the full opening by the end of June with maybe the terrace (which was largely untouched) opening sooner, maybe within three weeks.”
“With the help of everyone, Olivia’s will be born again, rising like a Phoenix from the ashes” he added.
Elliott wished to express his appreciation of all of the messages of support and offers of assistance that he has already received and particularly praised the Mijas Council, the police and Guardia Civil as well as local businesses.
He had nothing but scorn however for social media trolls who have suggested that this was a deliberate insurance scam, adding “I had a full refurb in January 2020 and who would do this two weeks before the tourists come? It’s a disgrace that people kick you when you are down!”
Of course, the last 12 months have been very difficult and although he kept the restaurant open when not prohibited due the states of alarm, business was much slower without tourist visitors.
All of this whilst he was very aware that his father Eddie’s illness was getting no better and he told this writer “I am devastated with what we are going through as a family, having to bury my father last week then to be under attack the following week and see my business go up in smoke has been the toughest thing I probably will ever have to deal with but I will get through it and won’t let it beat me.”
Elliott Wright is certainly determined and as a popular local figure and entrepreneur, we can only wish him well in rebuilding the restaurant named after his daughter Olivia and hope that whoever caused the fire is quickly caught and charged.