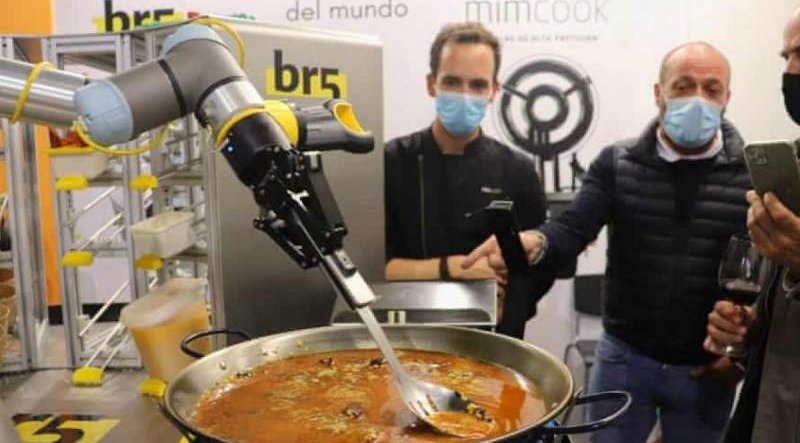 THERE’S a certain amount of skill involved in making paella, one of Spain’s most-loved traditional Valencian dish, and those of you who have tried it at home will know that things can go horribly wrong.

But two Spanish companies have teamed up to create a robotic arm which can pull of the perfect paella without burning a grain of rice.

The world’s first robotic paellero was unveiled at a hospitality industry fair last month and is already stirring up plenty of interest.

A joint project between the young company br5 (Be a Robot 5) and the paella stove manufacturer Mimcook, the robot has attracted attention from hotel and restaurant chains, as well as a Japanese firm.

Not surprising really as the robotic arm means all that is necessary is to place sofrito, rice, stock and seafood into a paella pan, and the robotic arm, which is hooked up to a computerised stove, will do the rest.

Br5’s founder, Enrique Lillo, told The Guardian the invention is latest in a long line of labour-saving devices that “save humans drudgery and allow them to focus on creativity”.

“It’s a multifunction robot: right now it cooks rice because it’s hooked up to a Mimcook, but you could hook it up to a fryer so it fries potatoes, or you could attach a grill so it can cook burgers, or an oven so it can cook pizza or croissants,” said the engineer, who named his company after the robot from the 1986 film Short Circuit.

“At the end of the day, it’s an assistant. I like to say it’s a bit like the orange-juicing machines where you put oranges in the top and get juice out of the bottom. That’s a robot too….no one looks at those and goes: ‘Crikey! It’s stealing jobs from people!’ No. It’s elevating human capacity.”

When it comes to making paella, Lillo explained that the robot will make sure the rice doesn’t burn; that the right amount of stock is used, “and it will be there if someone’s having an off day or if your rice cook goes off to work in another restaurant”.