La Cartuja In Sevilla Hosts The Iconic Sports Museum For 2021 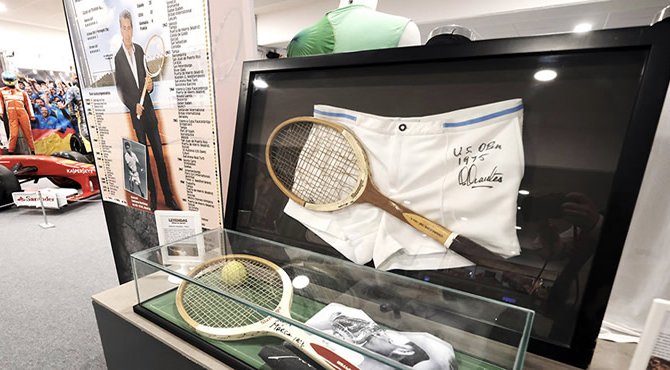 The Sports Museum, which is a travelling exhibition containing around 500 iconic objects linked to famous Spanish and World sports stars, and can currently be seen at the La Cartuja stadium in Sevilla, where it was inaugurated by His Majesty Felipe VI on April 17 when the Copa del Rey final took place, and will be on view until the end of December 2021.

the Ministry of Education and Sports organised for this exhibition to be housed in the Olympic Stadium as part of the program of activities to celebrate Andalucía being designated as a Sports Region for the year 2021 by the European Federation of Sports Capitals and Cities, ACES Europe.

The biggest number of items are from the world of football, including a football from Spain’s famous 12-1 victory over Malta in 1983, with Señor’s left boot, the one that sealed the historic win, as well as many shirts, but probably the stand-out one is that of Diego Maradona.

In the motoring section you can find two original Formula One cars, from Ferrari, and Renault, with a collection of outfits and accessories from Fernado Alonso, Jorge Lorenzo, and Carlos Sainz (Jr), plus a Yamaha team GP motorcycle.

One section is dedicated to famous Andalucía sports stars, which also features information on the ‘Mentor 10’ project, in which, elite athletes mentor children and young people in Andalucía in order to promote sports values, ​​and healthy lifestyle habits.

From the Olympics there are a series of Olympic torches, from the games of Mexico ’68, Barcelona ’92, and Rio 2016, and in the other areas you will find items including a bicycle from Induráin, a tennis racket from Manolo Santana, and a pair of boxing gloves from Evander Hollyfield, as reported by juntadeandalucia.es.