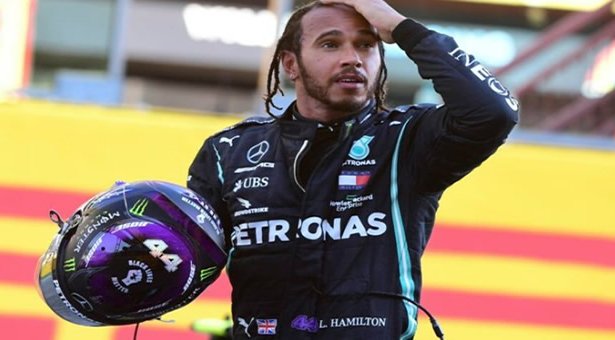 Lewis Hamilton has won the Portuguese Grand Prix today at the Algarve International Circuit in Portimão, for his second victory of the 2021 season, having started from third position on the grid, with the seven-time world champion‘s Mercedes finishing the race almost 30 seconds of Max Verstappen in the Red Bull.

Finland’s Valtteri Bottas had started on pole, but had to settle for third position at the end, with Hamilton’s win taking him seven points clear of Verstappen heading into the Spanish Grand Prix in Barcelona.

The safety car was deployed at the end of the first lap after Kimi Raikkonen ran into the back of Alfa Romeo team-mate Antonio Giovinazzi, and six laps later, after the debris had been cleared, Hamilton was caught napping as Verstappen sailed round the outside of his Mercedes at the opening corner.

Hamilton waited patiently for his moment, and on lap 11, he pulled alongside the Dutchman at around 200mph, and calmly slid his Mercedes up the inside line at the first corner to take the lead.

Speaking after the race, Hamilton said, “That was such a tough race, physically and mentally, and just keeping it together. It was windy, so it was easy to put a foot wrong. I lost out at the restart which was not good. I was not happy and I had to position myself the best I could. I then had to make a move on Valtteri before the tyres were destroyed, and I just made it stick at turn one”.

Max Verstappen said, “At the end, we just lacked a bit of pace and Lewis got by. Once we settled in second you could see we were lacking in pace compared to them. We were not on top of it here, but we will see what we can do in Barcelona”, as reported by uk.sports.yahoo.com.