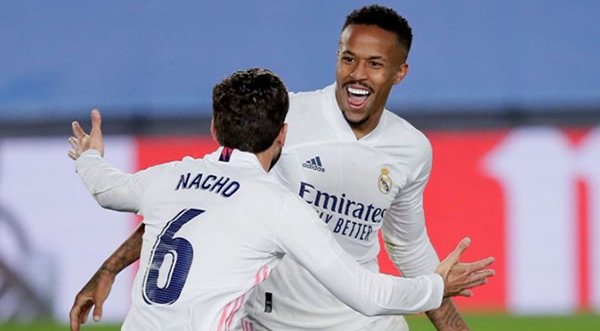 The battle at the top of La Liga in Spain heated up again with both Madrid clubs in action, as Atletico squeezed past Elche with a 1-0 win, meaning Real Madrid had to beat Osasuna at the Estadio Di Stefano later on Saturday evening if they were to stay in contention.

The victory was forthcoming, but not convincingly, as for 75 minutes Los Blancos struggled to take command of the match, with Zinedine Zidane no doubt with one eye on next week’s Chelsea match, opting to leave both Luka Modric and Toni Kroos on the bench, again starting with youngster Antonio Blanco in midfield.

Osasuna goalkeeper Sergio Herrera was in action early on as he tipped an Eden Hazard shot over the bar, and then performed a fantastic double-reaction save to keep Militao’s two headers out, and then, just on the stroke of halftime, Chimy Avila though his header had given the Pamplona side the lead, but, it was ruled out for offside.

An injury worry for Raphael Varane meant a halftime change with Nacho replacing him – surely a major concern for the Chelsea match –  with Hazard also being replaced with 20 minutes to go, by Isco, and it was Isco who was the provider from a corner for former Porto player Militao to finally put Madrid in front, as he put his 76th-minute header into the top right corner of the net for 1-0.

With Osasuna surging forward to try and equalise, it was probably inevitable that Karim Benzema would get his name involved somehow, as he fed the ball to Casimero, who in turn put the ball past Sergio Herrera to seal the three points on 80 minutes, and keep Real Madrid in second in the table, two points behind Atletico, as reported by marca.com.