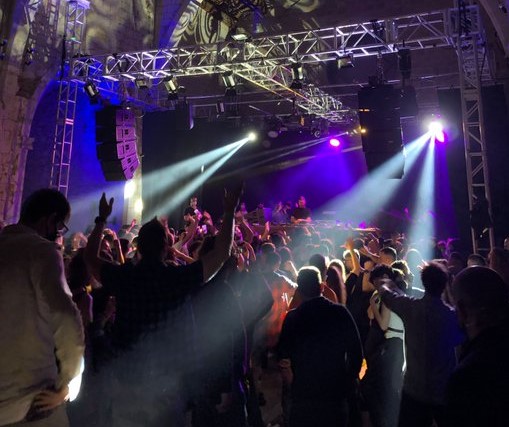 HUNDREDS of people ‘partied safely’ as part of a pilot scheme ‘Obrir Girona’ (Open Girona) at the weekend, without having to social distance – though they had to wear FFP2 masks at all times.

Around 250 partygoers enjoyed the La Mercè Electrónica Festival at La Mercè Cultural Centre in Girona as part of the pilot project which aims to get people back on the dancefloor safely in “spaces with low capacity for transmitting the virus”.

At 5 pm, as the doors opened, all of the revellers had to present a digital certificate that confirmed they had been vaccinated or had tested negative in an antigen test.

The five-hour ‘techno’ festival saw five DJs take to the stage and a chill-out area with bar service was set up where it was possible to have a drink, but smoking was not allowed.

“It is strange because we have not gone out for more than a year. We needed it a lot, and it gives us a lot of assurance that everyone has passed a test that ensures that there is no Covid,” two friends in their 20s, Judith Puerta and Carla Rubinat, told La Vanguardia, stressing it was “all very well organised”:

Organisers, Blockchain Centre of Catalonia, an entity led by the Chamber of Commerce, explained there are other similar initiatives in the pipeline, both cultural and sporting.

And this week, they have begun a ‘dining’ project in five restaurants in the city which will last until the end of the month.

However, the initiative has come under fire from political parties, such as Guanyem, which has denounced the fact participants in the project have to pay for a certificate to take part – costing up to €8.50.

According to the Department of Digital Policies, the government contributed €125,000 to the Obrir Girona project, in an agreement with the Barcelona Chamber of Commerce. Some €300,000 has been granted so far, reports the same Spanish newspaper.