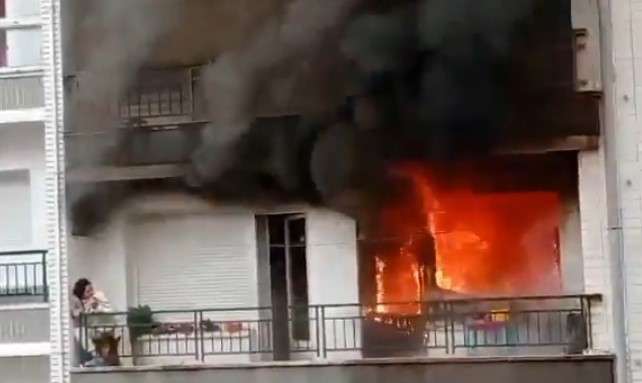 A TERRIFIED woman found herself trapped on the balcony of her fifth floor apartment as flames gutted her home and smoke billowed from the blown out window.

Firefighters from Castro Urdiales in Cantabria dowsed the flames with water while colleagues were forced to use a ladder to reach the woman on Sunday afternoon, May 2.

Bomberos Ayto Castro-Urdiales confirmed 112 Cantabria had given notice of a house fire and that three people were taken to hospital suffering from smoke inhalation.

“On arrival, there was a fully developed fire, broken by facade and a person trapped on the balcony, rescued her with autoescala #Bomberos. Total three injured and transferred to hospital,” the fire service tweeted.

When fire crews arrived at Calle Juan de la Cosa, the fire was already fully developed and the flames were coming out of the facade.

After several tense minutes, the firefighters used the ladder to reach the woman who was thankfully rescued without serious injuries.

It’s not clear exactly who the three people are who were taken to a nearby hospital in Laredo, but all of the neighbors on the same and the first floor were evacuated from the building.

An investigation has been launched to determine the cause of the blaze.

In other news, a house fire in Barcelona claimed the life of one resident and left a police officer injured.

The Generalitat Fire Brigade received a call at 6.33 pm on Thursday, April 29, from a neighbour reporting a fire, to which eight fire crews were deployed, five SEM units – two basic and three advanced – three Mossos patrols, and members of the local L’Hospitalet police, who, on arrival at the location, discovered a fire burning in one of the first-floor apartments.

Once inside the property, the firefighters found the body of a man, while the local Urban Guard officers had to break down the door of an adjoining apartment and rescue woman, 86, who had been overcome by the inhalation of smoke fumes, during which, one of the officers received injuries.