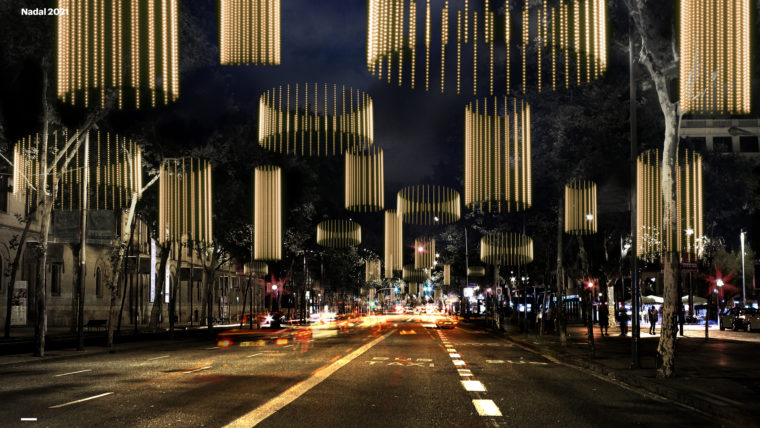 To ensure the festive lights truly dazzle, the budget has been increased by 24 per cent, and €2.06 million has been invested in the spectacular lights.

Deputy mayor, Jaume Collboni, explained at a press conference that “Christmas in 2021 has to be one of economic recovery and normality” to move out of the Covid-19 crisis.

“This year’s Christmas lighting will have more novelties, such as the fact that, for the first time, the Sant de Pere ring road, between Passeig de Sant Joan and Plaça d’Urquinaona, will be decorated with Christmas lights, thus joining other roads that have been lit for the first time in recent years, such as Plaça de Catalunya, Via Laietana, Plaça d’Urquinaona and Carrer de Balmes,” added the city council in a statement.

The winning design created by Estudi Antoni Arola is simple but effective: strips of warm-coloured LED lights that can be combined and “used in a thousand ways”.

At each point, they will be arranged in different ways to give each space “a different meaning and atmosphere”.

The grand unveiling and turn-on is scheduled to take place at the end of November to maximise the lights’ potential to attract visitors and boost the economy.

And in addition to the grand lights in public roads, hundreds more streets and squares will be filled with Christmas lights thanks to an initiative organised by merchants’ associations.

Barcelona recently set the stage for a live music concert which proved a Covid success.

Scientists who ran a pilot test at a Love of Lesbian concert in the city, that was attended by a live audience of 5,000 spectators, established that these events are not Covid super-spreaders as first thought.

The concert took place at the Palau Sant Jordi in Barcelona on March 27. All the spectators wore masks but did not observe any physical distance and were packed together as is normal in these types of musical events.

The data produced by Dr. Josep Maria Llibre, member of Fundació Lluita contra la Sida i les Malalties Infectious i l’Hospital Universitari Germans Trias i Pujol, indicated that after the concert only six infections were detected, of which, through a subsequent follow-up, it was determined that four were not due to attending the event.