Barcelona prepares its coastline for a surge in beachgoers 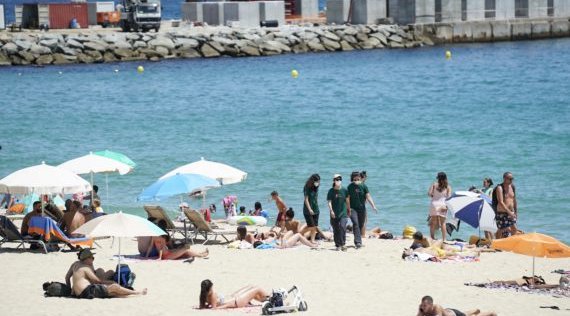 Barcelona prepares its coastline for surge in beachgoers at end of state alarm.

THE city council, together with the police, will control the capacity of its beaches and prohibit access if the 1.5 metre safety distance is not met.

And four beaches will be allocated for sports to comply with safety measures.

An app will allow people to check capacity and any other restrictions before leaving home, and a dedicated website will be constantly updated.

For the second consecutive year, and in line with the end of the State of Alarm on Sunday, May 9, Barcelona City Council will control capacity on its beaches due to the pandemic, and will close the accesses when there is a very high occupancy that makes respecting the safety distances difficult.

The plan is to have 24 ‘access controllers’ who will operate from 10am to 8pm seven days a week.

And a traffic light system will indicate the capacity of the beaches.

“Last summer there was too much sporting use, so this year we have limited sporting use to four beaches,” said Patricia Giménez, director of Playas de Barcelona.

Under the new measures, sport will only be allowed to be practiced in Bogatell, Somorrostro, Nova Icària and Bogatell beaches.

With regards to masks, they will not be mandatory when laying in the sun or swimming.

This closure will last “for as little time as possible” and will aim to “redistribute beach users to other parts of the Barcelona coastline” where necessary.

The Guardia Urbana will support the initiative and control measures, including policing illegal gatherings and parties at night, as was the case last summer, reports El Pais.