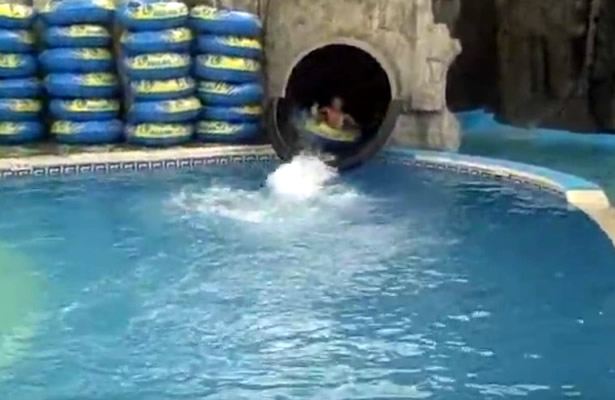 Costa Water Park Pays €100,000 Compensation To Tourist After An Accident Ten Years Ago.

A SPORTS instructor and personal trainer from the Netherlands who was on holiday on the Costa del Sol, and suffered serious injuries in an accident on an attraction at the Aqualand water park in Torremolinos 10 years ago, has been awarded €109,182 in compensation by a court.
The victim was 28 years old at the time, and went to Aqualand for the day with friends, and, with one of her friends, decided to try the ‘Black Hole’, a covered and curved water slide. The victim weighed 60kg, and her friend approximately 110kg, they were given a double float, and according to the victim, “followed the instructions of the lifeguard who was at the start of the attraction.”
As they went down the slide, gaining speed, the victim was thrown from the float, her head making contact with the side of the chute, and she was knocked unconscious, at which point she was rushed to the Santa Elena clinic in Torremolinos, where she was diagnosed with a fractured collarbone, which was operated on, but also she had received trauma to her skull and shoulder.
Juan Antonio López, from Legal 10 Abogados, the lawyer defending the victim, told the court how, as a result of the accident, his client has suffered neck pain, dizziness, loss of vision, and migraines, that can cause nausea and vomiting, and now has “limited ability to carry out everyday activities.”
In 2012 she had to undergo a second operation to relieve collarbone pain and has been receiving physiotherapy and treatment from a psychologist for the post-traumatic stress disorder caused by the accident, and had unsuccessfully sued the water park for an amount of €70,247 in 2014, but then she appealed to the Provincial Court of Malaga, which has now decided in her favour.
After the court ruling, the water park’s insurance company has already transferred the compensation of €109,182 to the victim, as reported by surinenglish.com.
The Euro Weekly News is running a campaign to help reunite Brits in Spain with their family and friends by capping the costs of PCR tests for travel. Please help us urge the government to cap costs at http://www.euroweeklynews.com/2021/04/16/ewn-champions-the-rights-of-brits-in-spain-to-see-loved-ones-again/