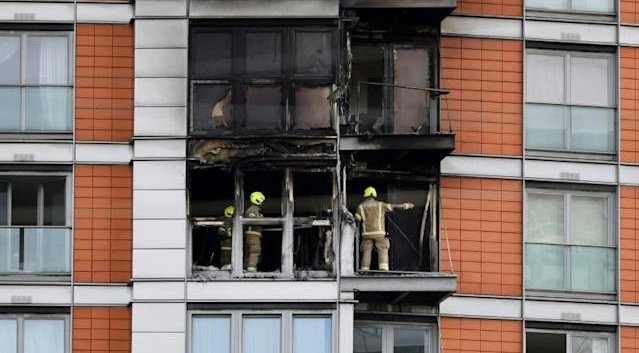 London Tower Block Fire Update: 36 adults and four children have been treated for shock and smoke inhalation after a major fire at an east London block of flats this morning.

Two men were rushed to hospital following the tower block fire in East London this morning, with a further 36 people treated at the scene by paramedics. It is also understood that four children were treated for shock and smoke inhalation.

A total of 125 firefighters and 20 fire engines rushed to the scene on Fairmount Avenue in Poplar at around 9 am this morning (Friday, May 7). Pictures and videos circulating on Twitter show the blaze several stories high, with smoke rising into the air. It’s reported that people were trapped on their balconies shouting for help, while other residents managed to evacuate.

The London Fire Brigade confirmed that parts of the eighth, ninth, and 10th floors of a 19-story block were ablaze. It’s also believed that a ground floor flat was destroyed due to water damage.

Around 20 percent of the building’s facade features ACM PE cladding panels – which were found to be a key factor in the Grenfell Tower fire in 2017. Work to replace the cladding was “underway”, building developer Ballymore said in a statement. The main contractor had been due to take possession of the site this coming Monday.

A spokesman for the fire service has said that the fire is now under control.