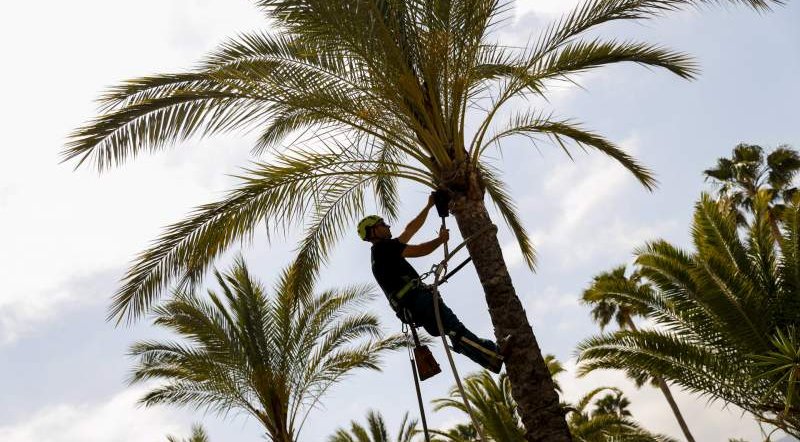 Tree surgeons OPERATIVES from a specialist firm are lopping the town’s 600 palms and other trees in Alfaz’s public places during the Technical Services department’s annual campaign.  This is always carried out at the same time each year, not only to prune the trees but also detect and treat possible diseases.
Exam time PUPILS from seven high schools in Benidorm and La Nucia will sit their university entrance exams in La Nucia’s Muixara sports stadium on June 8, 9 and 10. Spacious and well-ventilated, it is an ideal location and complies with all anti-Covid health and safety requirements, municipal sources said.
Tyre slasher A 75-YEAR-OLD man who was arrested in San Vicente and charged with slashing 20 tyres on 14 vehicles claimed they were “in his way.” The constant comings and goings of the clients of a car-repair garage in his street prevented him from entering his own garage, he alleged.
Night bus AS wrangling continues over the concession to run Benidorm bus station’s commercial area and with few travellers during the State of Alarm, the homeless have broken into empty premises there.  Arriving each evening to sleep overnight, they intimidate clients visiting the few businesses that remain open, employees claimed.
Spring concert BENITACHELL hosts the 15th edition of its Primavera Concert Cycle that continues until June 20.  This begins with a recital of songs from operas and zarzuelas at 6pm on May 16 in the Santa Maria Magdalena parish church by the soprano Teresa Albero and baritone Rodrigo Esteves.
Chance find VILLAJOYOSA’s Vilamuseu museum is celebrating the town charter’s 720th anniversary by displaying a silver coin that was minted more than 700 years ago in Barcelona and depicts Jaime II of Aragon.  Found by chance during Calle Pizarro roadworks in 1999, the coin can be seen until next July.
Keep off JAVEA is spending €683,655 on a four-year contract to install marker buoys that will protect its coastline from growing pressure from yachts and pleasure boats, especially in increasingly popular coves like En Calo.
Jab time TEULADA-MORAIRA’S Auditorium has been confirmed as the joint centre for the vaccination campaign that will begin on May 24 for residents living in Teulada-Moraira and Benitachell who are registered on their local Padron.
More jobs THE unemployment rate in L’Alacanti, which despite its name does not include Alicante City, is lower than the provincial average, with 217 people finding employment last March despite the effects of the pandemic.