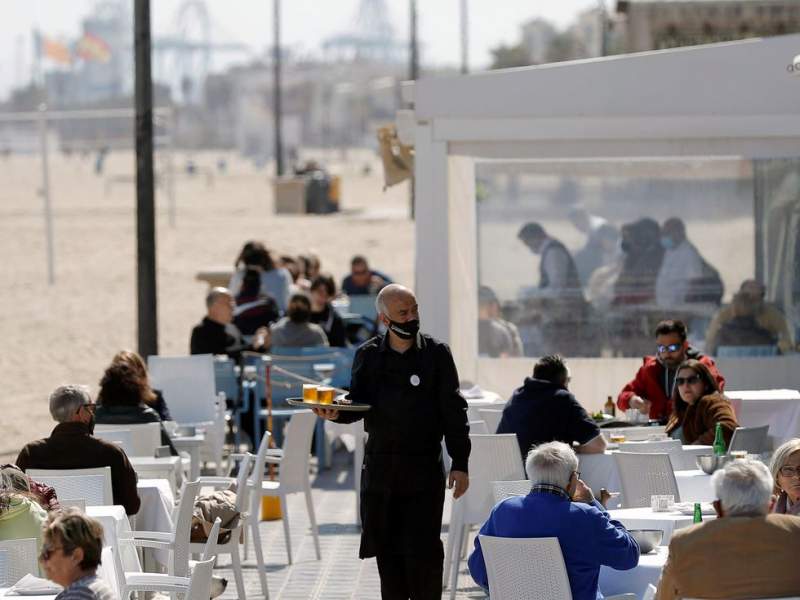 The hospitality sector in Andalucía will be able to have groups of eight people indoors and ten outdoors, but according to the official document, the BOJA, will have to wait at least until May 13 to be able to do this.
This brings to an end a long period of Covid restrictions in Andalucía, such as the curfew and the border closures throughout the community. However, after the publication of the Official Gazette of the Junta de Andalucía (BOJA) on Friday, May 7, it is revealed that there are measures such as the increase in the number of people on the terraces that will not be immediately applicable.
The Junta de Andalucía details in the BOJA all the new alert levels that affect this data and, therefore, the new capacities, which will not come into force until May 13.
Until then, it is necessary to obey the rules in force which were set last October: “The classification of the different levels and gauges made by this Order will take effect from 00:00 hours on May 13, 2021. Until then, the provisions contained in the Order of October 29, 2020, of the Regional Ministry of Health and Families will continue to apply”, states the publication.
This is confirmed by the Association of Hoteliers of Malaga (Mahos), which indicates the number of diners “remains 4 indoors and 6 outdoors, according to the levels decided by the health committees”.
The BOJA does make a distinction and reserves a special space for nightlife, which has already begun to open until 2 am: “Excepted from the provisions of the measures set out in Article 18 of this Order relating to establishments for leisure and recreation and for meetings in public spaces, which will take effect from 8:00 am on May 8, 2021”.
The number of people allowed at a table in a bar, will also depend on the level of alert in the particular municipality.
Provinces such as Malaga are at level 2, but for example, Seville, which is at level 3, would only be allowed tohave a maximum of four people inside and six outside. An announcement will be made on May 13 when it will be revealed which municipalities can increase the capacity of the tables on their terraces. On that same day, the territorial committees meet again to define the level of alert in each health district or municipality of Andalucía.
Judicial consent will be requested for the closure of municipalities with a 14-day accumulated incidence of more than 1,000 cases per 100,000 inhabitants and the prohibition of all non-essential commercial activities. This Spanish government passed a law allowing this recently with the Balearic Islands and Catalonia applying for extensions to the curfew and other restrictions.
From the 13th and according to the level in which each municipality would be: 10 outdoors and eight indoors for those in level 1; 8 and 6 for those in level 2, and 6 and 4 for those in levels 3 and 4.
Four alert levels (1, 2, 3 and 4) will be created according to the health situation, which will be used to regulate the capacity in the different municipalities.
Pubs and discotheques can open until 2 am and as of today, there is no municipalities in level 1 in Andalucía.
Regarding swimming pools and beaches, there will be no specific timetables and there will be the obligation to maintain a distance of 1.5 meters between groups on the beach.
As for theaters, shows, sporting events, or bullrings, in municipalities with levels 1 and 2, groups of spectators will be separated from other groups by a seat all around, while in municipalities with levels 3 and 4, spectators will be separated by 1.5 meters.
Source: diariosur