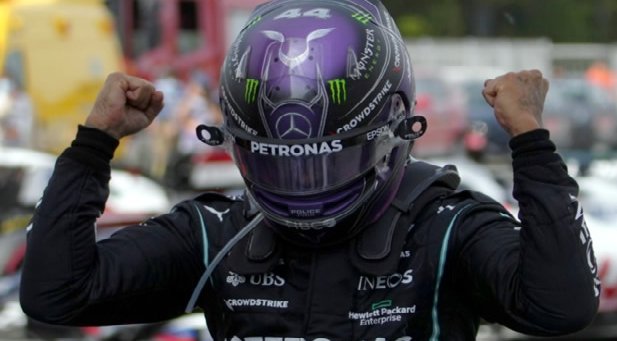 Lewis Hamilton has won the Spanish Grand Prix today, Sunday 9, at the Circuit de Catalunya in Barcelona, for the seven-time champion to claim a record-equalling fifth win in a row, extending his lead over Max Verstappen to 14 points, after an almighty battle with the Dutchman, who had to be content with second place in the end.

Hamilton had started the race on pole, alongside the Dutchman, but as the light turned green, it was Verstappen who got the drop on the Brit, firing his Red Bull down the inside of Hamilton’s Mercedes, forcing him to go wide, and roaring off in the lead on Turn One, and by the end of the first lap he was already 1.7 seconds ahead.

Fortune favoured Hamilton when Yuki Tsunoda‘s AlphaTauri seemed to simply stop at Turn 10 for no reason, and the safety car came out until the race got going again on Lap 9, where Verstappen again left the rest of the field standing as he took off, as reported by skysports.com.

Pit stops played a big part in the race, and with a set of fresh tyres, the Brit closed Verstappen down until he pounced on Lap 60, charging up to the Red Bull with DRS and braking late into Turn One to regain the lead, taking the chequered flag almost 16 seconds clear of the young Dutchman, with Valtteri Bottas of Finland in third, and France’s Charles LeClerc in fourth.