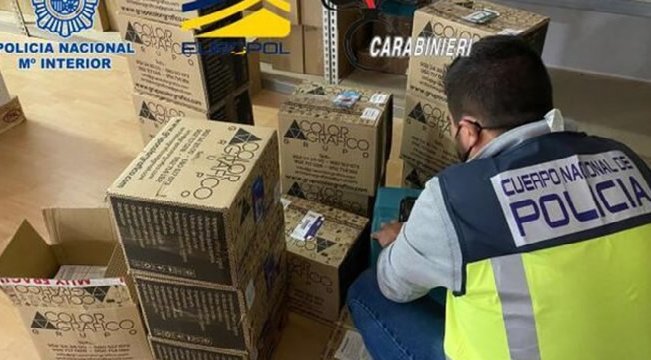 A joint operation involving the Carabinieri of Italy, the Romanian Police, and the Spanish National Police, with the participation of EUROPOL, has resulted in the dismantling of a criminal organization allegedly dedicated to the trafficking of drugs that they disguised as nutritional products.

As a result of this operation, officers have arrested six people in Malaga, and two more in Barcelona and have blocked four websites in addition to 21 bank accounts associated with those investigated, in which there were €3.5 million.

The detainees have been charged with crimes against public health, belonging to a criminal organization, money laundering, fraud, falsification of documents, smuggling,  and crime against public finances, according to elcasomalaga.com.
A total of 117,700 tablets were confiscated in the operation, which, when analysed, were found to contain the ingredients sildenafil and tadalafil – substances prescribed for the treatment of erectile dysfunction – the listing of which were not present in the actual labelling of the product.
The investigation was launched after the National Police in Spain received information from Europol, that the Carabinieri had reported the interception of 2,123 packages of a product that had tested positive for the chemical sildenafil, warning that the product came from two English distribution companies, one of which had a Spanish representative in Malaga.
When health authorities in Spain had passed legislation prohibiting the sale of products containing certain ingredients, the criminal gang simply repackaged the exact same products under a different name and logo, and were passing them off as vitamin supplements, with officers warning that this type of product poses a serious health risk, reporting that one client had suffered a stroke as a result of taking some.
The Euro Weekly News is running a campaign to help reunite Brits in Spain with their family and friends by capping the costs of PCR tests for travel. Please help us urge the government to cap costs at http://www.euroweeklynews.com/2021/04/16/ewn-champions-the-rights-of-brits-in-spain-to-see-loved-ones-again/