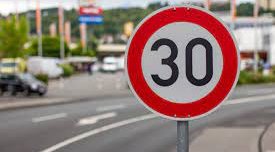 Although it was initially announced at the end of last year, the General Directorate of Traffic (DGT) gave municipalities a period of six months in order to adopt the necessary measures.

Roads with two lanes in municipal areas now have a limit of 50 km/h- down from 80 km/h. Also, the extra 20 km/h speed allowance that could be used whilst overtaking is no longer legal.

As reported in an earlier article by the EWN, penalties just for holding a mobile phone while driving a car and the use of a radar detection device come into force today. Points will be deducted by Traffico from driving licenses for failure to wear a seatbelt correctly.

The new regulations particularly aim to reduce deaths in urban areas. The new speed limits should also result in a reduction in pollution and noise, traffic flow is likely to be eased too.

The European Union, within the framework of European policies on road safety for the period 2021-2030 bases its approach on the “Safe System”, in which roads and vehicles must be designed to assimilate a margin for human error without causing serious injury or death and the speed limits permitted for vehicles are one of the components of the safety level provided for the other parts of the system.

Lastly, the slogan chosen by the United Nations for this year’s 6th Global Road Safety Week, to be held from 17 to 23 May 2021, also focuses on a reduction in the speed limit to 30 km/h in built-up areas, entitled “Streets for Life #Love30”.