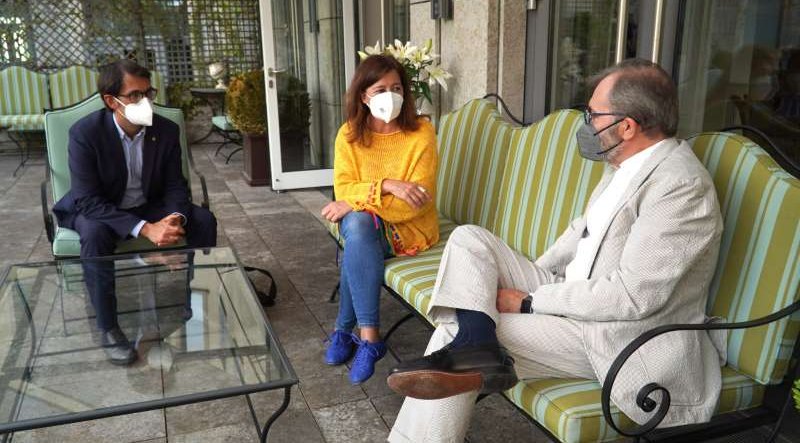 Armengol and Negueruela with the Spanish Ambassador to Germany Credit: Twitter

THE Balearic Government and the hospitality industry are more than disappointed that Spain has not been included in the initial Green Light list for easy travel from the UK.
This means that upwards of an estimated 100 hotels on Mallorca will delay reopening as there will be insufficient tourists to make it economically attractive to open again during May.
Ironically, if a change of heart takes place and either Spain is added in the next review, or as the Government hopes, the Balearics are given special treatment, it may be too late for many hotels to take immediate advantage of an influx of British visitors.
Last Monday, May 10, Tourism Minister Iago Negueruela made it clear that in his and the Balearic Government’s opinion, the Balearic Tourist Industry had been harmed by the less stringent regulations employed by the community of Madrid and the Basque Country which retained much higher levels of infection.
With regards to this, he said “They have harmed the Balearic Islands in the decision of the United Kingdom not to include Spain in green in its traffic light to facilitate the travel of its citizens.”
Both he and President Francina Armengol have asked that the UK should recognise the fact that the Balearics still retain some of the strictest health measures and have some of the lowest incidents of coronavirus, by including the region in the Green Light list, even if Spain remains in Amber.
In the meantime, they have both travelled to Berlin, meeting with the Spanish Ambassador to Germany and asking for his assistance to promote the Balearics as a safe haven for German tourists.