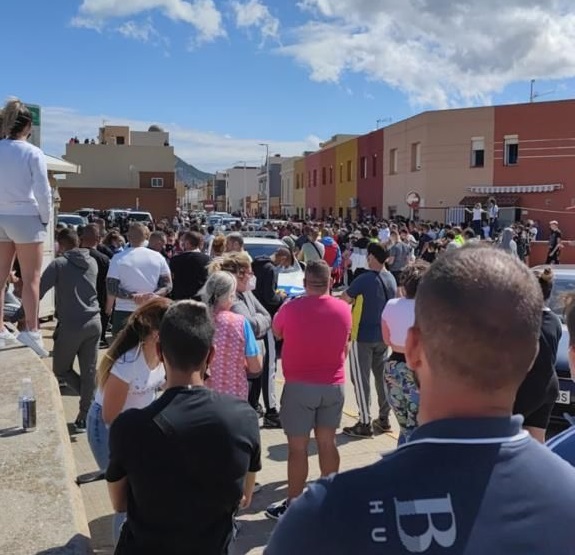 Tensions Still High In La Linea Following Riots Over The Death Of Two Men At Sea On Monday.

Tensions are still running high in La Linea (Cádiz) following the riots that broke out over the death of two local men, believed to be smugglers, that drown at sea on Monday, according to sevillaabc

Hundreds of people gathered in the vicinity of the fishing port, where the bodies were taken and their deaths certified after unsuccessful attempts by the Spanish emergency services to save their lives.

Things got so bad after hearing the men had died that locals starting pushing and shouting abuse at the police who had to resort to calling in for help from the riot squad.

“Murderers”! the crowd shouted, as a tirade of abuse and stones were aimed at the officers. Containers were set alight along the paseo and there were reports of masked speeding motorbike riders throwing petrol bombs at the police and their patrol vehicles.

A strong police deployment kept the peace last night in the densely populated neighbourhood. However, for the moment, there have been no reports of arrests or serious injuries.

Some police vehicles suffered significant damage as at times the patrols had to withdraw while they were completely surrounded and threatened by the baying crowd who hurtled bottles and stones and pushed the police cars from side to side.

What caused the riots?

It is understood that the two deceased men, residents of La Línea and aged 51 and 19, were sailing in a boat that is usually used to transport gasoline for drug smugglers- a common occurrence in this impoverished and high unemployment area.
For reasons not yet clear, the boat developed a problem, and the occupants jumped into the sea to try to fix it, apparently, they couldn’t and decided to swim for the shore- tragedy struck when both men drown after being swept away by the strong currents.

The National Police later confirmed that they had spotted two people swimming next to a boat with difficulties staying afloat and that fishermen were sent out to help them. A third person could have been in the boat, according to police sources and a Maritime Rescue helicopter searched the area in the afternoon looking for him- but to no avail.

Alerted by the Maritime Service of the Guardia Civil, a patrol boat approached the scene and officers verified that both men were unconscious on board the boat. A member of the patrol carried out intense recovery procedures, but without success.

Once the bodies were transferred to the port of Atunara, the members of an O61 ambulance continued with resuscitation procedures for 25 minutes, ending them at 3:00 p.m. and declaring the men deceased.

In addition to the burning of containers and street furniture, barricades have been set up, preventing road traffic in several streets of La Atunara and San Bernardo. protesters also set fire to the “La Marina” restaurant, a gastronomic landmark in Campo de Gibraltar.

One of the officers of the National Police deployed in the area said he had never been seen anything like it and that the patrols had been completely cornered. It was that bad he said that the port of La Atunara had to be completely evacuated due to the riots.

The mayor of La Línea, Juan Franco, said that Monday, May 10, was one of the “most complicated” afternoons and nights that he has had to live through in his six years in office. “I am sorry for the two deaths and I hope that an investigation will be opened to determine the causes. I feel tremendous shame for everything that is happening in La Atunara. The vast majority of ‘Lineanses’ are hardworking and honest people who do not even deserve what is happening in this neighbourhood,” he said.

The bodies of the two men have been identified by their relatives and, once the autopsies are carried out, their funerals will be held on Wednesday, May 12, morning. Hopefully, respect for the families of the men, and the tragic loss of the lives of the men themselves, will keep tensions at bay and there will be no further trouble.