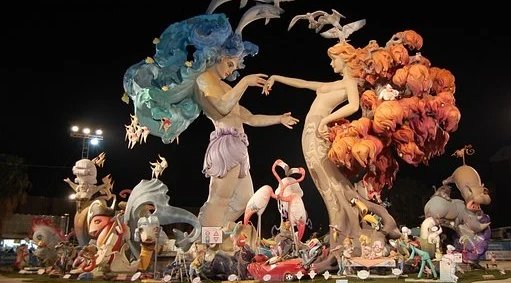 Valencian Community Set to Celebrate.
The Valencian community is set to celebrate from September as popular festivals such as Fallas will be allowed to take place from September 1.
In a move that will delight many locals the Fallas of Valencia and numerous other fantastic festivals will be allowed to be celebrated in the Valencia region after September 1. The councillor of Health, Ana Barceló, announced the move on Monday to representatives from the Fallas community including the Junta Central Fallera, the Interagrupación de Fallas de València, the Federación de Fallas de Primera A, the Federación de Fallas de Especial and the Federación de Fallas de Burriana.
Sadly, last year’s celebrations had to be cancelled due to the ongoing Coronavirus pandemic. The counsellor highlighted that the move “is the starting point for any type of popular or traditional celebration, although the exact date is to be decided by each group”.
In order for the iconic Valencian events to take place in September though all coronavirus preventative measures that are in force at that moment in time will need to be followed. It was highlighted that “crowds of all kinds must be avoided, both for the personnel inside the festival and for the people who attend the events”.
According to La Sexta, “In addition, the councillor was in favour of studying the possibility of the falleros holding events such as the offering of flowers to the Virgen de los Desamparados, which the group considers ‘practically essential’”.
The government hopes that by planning for the celebrations to start in September the Coronavirus pandemic will be further under control as by this point herd immunity should have been reached throughout Spain. It is believed that the September date “guarantees an important margin of time and more possibilities of controlling the pandemic”.
In Spanish vaccine news, the Spanish vaccination programme is picking up speed and so far over 6 million people have been fully vaccinated.
The vaccination campaign in Spain initially had a slow start but it has been speeding up and Prime Minister Pedro Sánchez has now been confident enough to place an end date on the crisis. Sánchez has stated that “We are just 100 days from achieving group immunity,” and by herd immunity he means that “70 per cent of the Spanish population” would have been fully vaccinated.
The Euro Weekly News is running a campaign to help reunite Brits in Spain with their family and friends by capping the costs of PCR tests for travel. Please help us urge the government to cap costs at http://www.euroweeklynews.com/2021/04/16/ewn-champions-the-rights-of-brits-in-spain-to-see-loved-ones-again/