London Bridge Is Down: What happens In The Event Of The Queen’s Death? 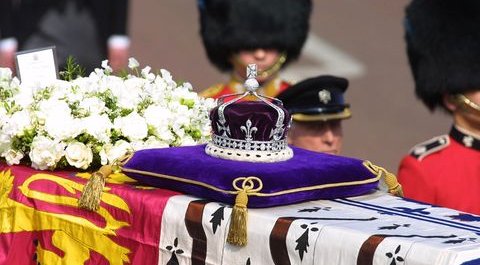 London Bridge Is Down: What happens In The Event Of The Queen’s Death?

What happens In The Event Of The Queen’s Death?

Good Morning Britain host Alastair Campbell made probably the biggest gaffe of his career when he announced that Queen Elizabeth II was dead this morning, May 12, on live TV. It happened during an interview with ex-footballer Vinne Jones, who was on the show to talk about mental health and the way he handled the loss of his wife to cancer.

His wife Tanya died in July 2019 after a six-year battle with cancer, leaving her family and Vinnie devastated.

Did you know that the code for Queen Elizabeth II’s death is “Operation London Bridge?”

The Queen recently entered an eight-day period of mourning following the death of her husband Prince Philip at the age of 99 on April 9. Following the announcement of the sad news, the monarch withdrew from public life, with all engagements being put on hold and no affairs of state being conducted. Many people have been left wondering what happens when the Queen dies.

Although no one likes to mull on anyone’s death too much, the monarch recently turned 95, and the day will inevitably come when the throne passes to Prince Charles.

“Operation London Bridge” is composed of a complex, intricate, and timed-out plan that has been in place since the 1960s. It is also a highly-detailed plan that consists of everything from exactly how the nation will be told, what happens in the next days and hours, to the funeral preparations and the announcement to the world that Prince Charles is now the King of England.

In the event of the Queen’s death, her majesty’s private secretary Sir Christopher Geidt would be the first official to convey the news setting “Operation London Bridge” in full motion.

The code word “London Bridge is down” will be used to inform the Prime Minister of the news. The news of her death will then be distributed to various heads of state before it is finally made known to the public. The British press and the world’s media outlets would be informed next.

At Buckingham Palace, a footman will pin a black-edged notice to the gates and the palace website will be transformed into a sombre, single page, mirroring the same text.

The public will find out in a newsflash after the Press Association, newspapers and television and radio stations have been told. All BBC channels will show the BBC One broadcast announcing her death. Other channels are not required to interrupt regular scheduling, though it’s almost certain they will.

Following the initial announcement, the BBC will cancel scheduled comedy shows until after her funeral. After prince Phipls death, The BBC drew thousands of complaints to Ofcom over the coverage with many people saying it was just too much.

Commercial radio stations will control an “Obit light” that glow to tell DJs when to play appropriate music and go to the news at the next available moment.

Newscasters on TV will wear black attire with news likely to dominate most channels for weeks. The same moment she passes, her son, Prince Charles, will become King, and his wife Camilla will become Princess consort.

Outside the Palace, all the British flags will be lowered, and bells will be tolled. The parliament will also gather, and on the evening of his mother’s death, Prince Charles will make his first address to the public as king.

The day after her death flags flying at half-mast will be raised and Charles will be proclaimed king. Trumpeters from the Life Guards, wearing red plumes on their helmets, will step on the roof of Buckingham Palace and give three blasts.

A 41-gun salute – almost seven minutes of artillery – will be fired from Hyde Park. Great Britain will then enter a 12-day mourning period, culminating in the Queen’s funeral.

Meanwhile, Charles will tour the country and make stops in Edinburgh, Belfast, and Cardiff to appear at services to honour his mother and meet with elected leaders- the Royal Family tree and line of succession will then continue.