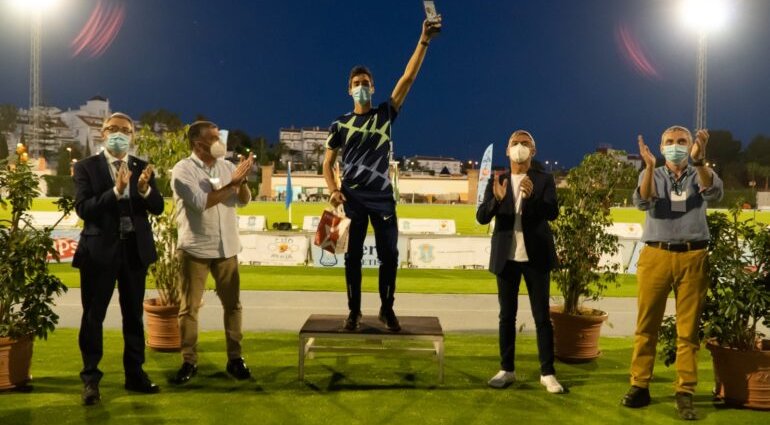 Elite professional athletes gathered together yesterday, May 12, in a sporting event that saw four national records broken. The second Meeting Challenge Nerja 2021 was held at the Enrique López Cuenca Stadium and also saw an Olympic minimum achieved. The event also had 500 spectators who were able to watch the show live, Nerja Town Hall has announced.
The mayor of Nerja, José Alberto Armijo, the president of the Malaga Provincial Council, Francisco Salado, and the councillor for Sports, Daniel Rivas, together with the vice president of the Royal Spanish Athletics Federation, Enrique López Cuenca and the sponsors Francisco Ortega ‘Ayo’ and Francisco Urbano, were in charge of giving out trophies.
The councillor said that “the sporting Nerja has shone this afternoon thanks to this important first-level event in which more than 30 professional athletes have gathered, which comes to recognise our municipality as a safe destination for the celebration of these sports events and recognition at the most acceptable level of our municipal sports facilities. We hope that this Meeting Challenge will continue to develop in future editions and offer moments as exciting as those experienced today.”
Commemorative plaques of recognition from the mayor of Nerja, the president of the Provincial Council and the councillor for Sport were also given to the sponsors Francisco Ortega and Francisco Urbano, owners of the Ayo Merendero and the Pulguilla Restaurant, and Enrique López Cuenca of the Club Nerja de Atletismo in celebration of the sporting event’s success.
Regarding the tests, Jesús Gómez won in the 1,000m absolute, surpassing Olympic champion Fermin Cacho’s record. Carla Domínguez in 2,000m, with new national marks in sub23 and sub20, and Mohamed Katir who won the 1,500m, scoring 3: 33.62 which gave him an Olympic minimum.
In the hammer tests, Juan Jimenez achieved 73.13m and Irene Gómez with 60.13m obtained two minimums for the European sub20. Finally, Isidro Leyva won reaching 5.45m.