A short personal view of the Israel/Palestine situation 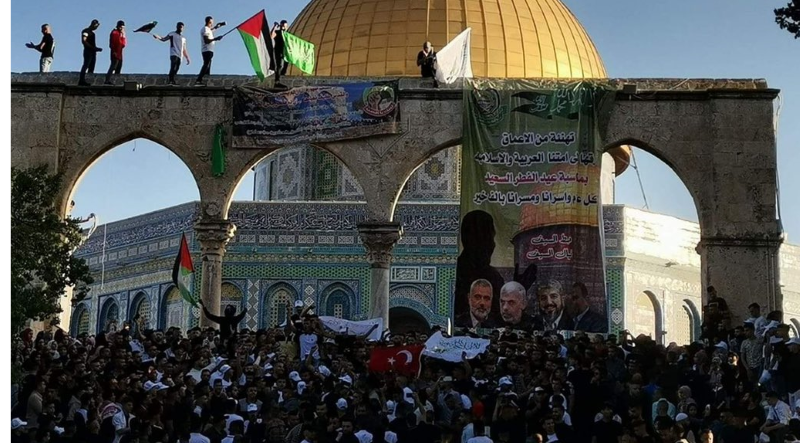 Palestinians protest outside the Dome of the Rock in Jerusalem Credit: Twitter

TRYING to write dispassionately about the latest conflict between Israel and Palestine is difficult especially when one considers that both sides have such very strong convictions.

It is about 20 years since I last visited Gaza at which time, I was trying to negotiate with the authorities there to produce coins and stamps for the Palestine State.

I had access to the authorities through three different contacts, one an Israeli Jew, the second a Bosnian Muslim and the third the Christian representative of Palestine in the UK.

I found the people in Gaza very welcoming and it was clear that they were very poor with rubble and decaying buildings everywhere and Israeli jets overflying every few hours.

Having said that however, a bomb had been placed in a Tel Aviv bar a few weeks earlier and the whole of Israel was on alert in case of further attacks.

Despite all of the introductions that I received and a meeting with Yasser Arafat (who was frankly in his dotage by then) in London, nothing came of the approaches although there were quite a few suggestions that a donation to the cause would be welcome!

Looking back, it is clear that whatever happens, there will always be animosity between the two sides.

Recent history goes back to 1917 and the First World War when the UK took over control of Palestine which was at that time inhabited by a Jewish minority and an Arab majority.

British Foreign Secretary Lord Balfour made a statement saying that Britain publicly pledged to establish “a national home for the Jewish people” in that area and from then until the start of the Second World War the number of Jewish people arriving – many of whom were fleeing Nazi and Communist persecution – kept growing.

With the bombing of the British Administrative offices at the King David Hotel in Jerusalem by Zionists and ongoing disharmony, in 1947, the UN voted for Palestine to be split into separate Jewish and Arab states, with Jerusalem becoming an international city but this never came to fruition.

One year later, the British left and Jewish leaders declared the State of Israel which led to conflict with not just Palestinians but to other neighbouring States which saw Israel triumphant and many Palestinians forced to leave their homes.

Since that time, Israeli settlements have expanded and there has been conflict, either through open hostility or political threats which occasionally erupt into significant attacks by both sides.

The current unrest sees the Israeli’s blaming the Palestinians and vice versa but there is no doubt with riots in many Israeli cities, the firing of almost 2,000 rockets from Gaza and reprisals against Hamas which rules Gaza, means that pent up rage perhaps finding an outlet from the pandemic will either lead to a possible civil war or see yet another cessation of hostilities following the death of too many people.

There will also be economic ramifications for Israel as it has just been placed on the UK Government Green Light list for holiday visits but it would be a very brave holiday maker who would fly there at the moment to enjoy the many beaches and café society.

I take no sides in this division but hope that some form of lasting agreement may eventually be reached which would bring peace to those living in the area.