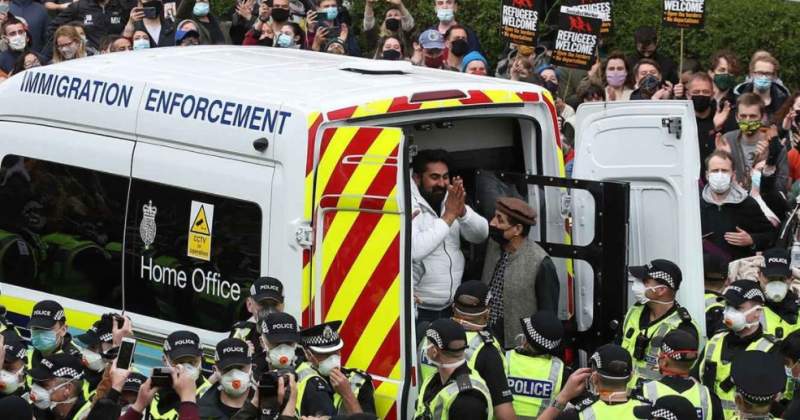 TWO men detained by British immigration officials in Glasgow were eventually released after a seven-hour peaceful standoff between hundreds of protesters and Scottish police.

Scottish First Minister Nicola Sturgeon slammed the “unacceptable” action by Britain’s Home Office to detain the Indian men, especially as it came during celebrations for the Muslim holiday of Eid al-Fitr, in an area hit by the pandemic, according to a report by the BBC.

The UK Home Office said in a statement that the men were detained “in relation to suspected immigration offences” and had been released on bail pending further enquiries.

Ms Sturgeon said in a tweet that Police Scotland officers had been put in an “invidious position” after being called to support the Home Office operation. “To act in this way, in the heart of a Muslim community as they celebrated Eid, and in an area experiencing a Covid outbreak was a health and safety risk,” she said.

Police were first called to Kenmure Street in Glasgow, Scotland’s largest city, at about 10am where the Immigration Enforcement van with the men in it was surrounded by protesters, including neighbours of the men.

“I’m just overwhelmed by Glasgow’s solidarity for refugees and asylum seekers,” said Roza Salih, shouting to be heard over the jubilant shouts of “refugees are welcome here.” She added: “This is a victory for the community.”

Salih, who had been at the protest since the morning, is a Kurdish refugee and co-founded the Glasgow Girls campaign in 2005 with fellow pupils to prevent the deportation of a school friend and fight against dawn raids.

Earlier Salih questioned why the widely condemned practice of dawn raids appeared to be recurring 15 years later in Glasgow, the only dispersal city for asylum seekers in Scotland. She also highlighted the jarring impact of carrying out such an action during Eid al-Fitr, the Muslim festival marking the end of Ramadan, in one of the most multicultural areas of the city and within the constituency of the first minister, Nicola Sturgeon.