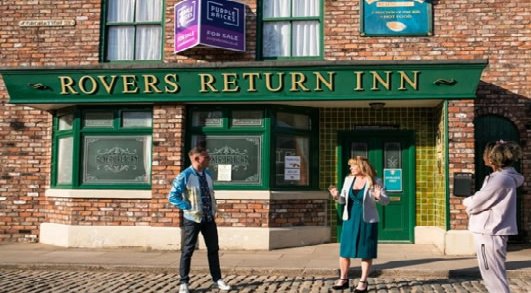 THE Rovers Return, the legendary boozer on the famous cobbles of Weatherfield since back in 1960, at the heart of Coronation Street, is to be at the centre of an explosive new storyline from the writers of ITV‘s long-running soap, where it will be put up for sale by Johnny Connor when he comes out of prison.

The Sun has gained access to photos from the set of Corrie, that show an estate agent’s board fixed on the wall of the iconic pub, after Connor, locked up for a historic armed robbery in the soap, gets early release from prison and comes home to find out that his screen wife Jenny has slept with B&B guest Ronnie Bailey while he was inside.

Realising that his marriage is over, the landlord, in a fit of temper, contacts a local estate agent and puts the pub on the market, but as yet, the identity of the new owner has not been revealed, in a storyline that is bound to shock fans of the soap.

One of the photos obtained by The Sun shows Jenny standing in the street outside the iconic Rovers frontage, trying to explain to Emma Brooker and Shaun Tully why a ‘For Sale’ sign has suddenly appeared bolted to the wall of the pub – the sign of a real-life local estate agent, Purplebricks.

Corrie boss Iain MacLeod told The Sun about the new twist, “The upcoming story around the sale of the Rovers Return pub stems from something exciting that happens between Jenny and Johnny – but it also led to an exciting opportunity to team up with Purplebricks to sell the nation’s most iconic pub.”

Adding, “The presence of a real Purplebricks sign outside adds a little bit of extra realism to a really relatable story between two of our best-loved characters.”