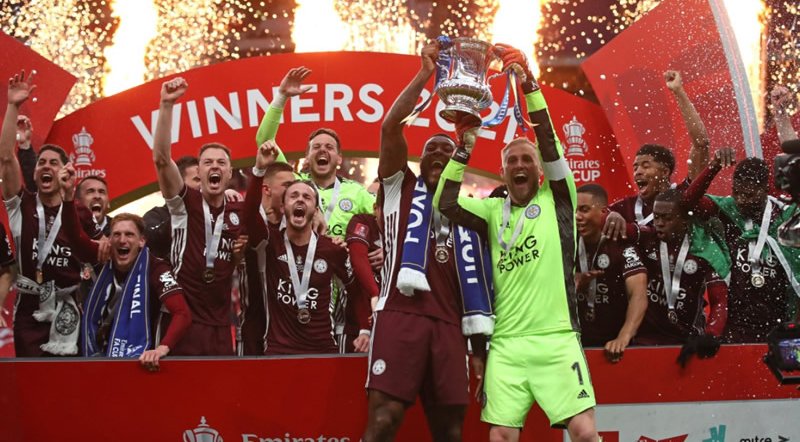 Leicester City made history at Wembley Stadium today, Saturday, May 14, by winning the 2020-21 Emirates FA Cup for the first time in their 137 year history, beating Chelsea 1-0, with Belgian Youri Tielemans scoring one of the most memorable FA Cup final goals ever seen, blasting a 25-yard screamer into the top corner of Kepa Arrizabalaga‘s net on 63 minutes.

Today saw 21,000 supporters allowed into Wembley for the first time since the start of the pandemic, and they were treated to a great spectacle of football as both teams fought hard for the win, with Leicester fans witnessing their club’s first FA Cup final since 1969, which they lost 1-0 to Manchester City, and stats showed that the Foxes had not beaten Chelsea in seven previous FA Cup fixtures.

Leicester had Kasper Schmeichel to thank for keeping them in the match, as he first pushed former Foxes player Ben Chilwell’s header onto the post, before making an incredible save to prevent Mason Mount’s shot from going in.
Chelsea had the ball in the net for what looked like a late equaliser, as Chilwell prodded the ball home after a goalmouth scramble, only to be ruled out by VAR, with Brendan Rodgers’ men holding out for the win, amid scenes of wild jubilation for their travelling fans.
A top class performance from 24-year-old Tielemans saw him deservedly named man of the match with a performance that aside from his wonder strike, simply oozed quality.
Now Rodgers must bring his players back down to earth and concentrate again on the other task of finishing in the top four in the Premiership to qualify for next season’s Champion’s League.