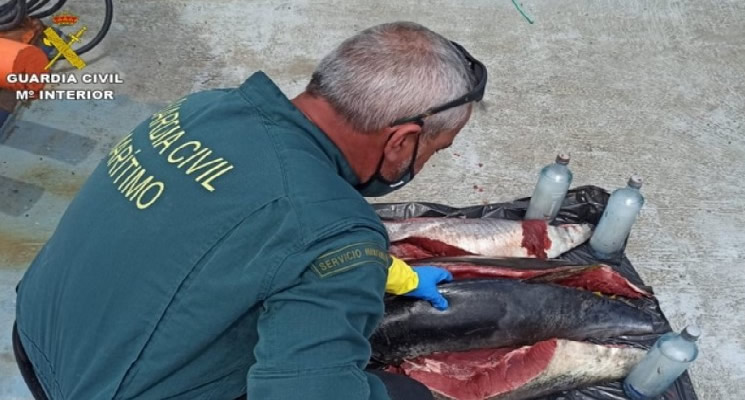 Alicante Fishermen Caught With Illegal Blue Fin Tuna fish that they had allegadly hoped to sell.

THE Provincial Maritime Service (SMP) of the Guardia Civil in Alicante Province, on the Costa Blanca, in the last few days has discovered fishermen who had caught and were trying to sell, bluefin tuna (Thunnus Thynnus), in the two ports of Altea and Villajoyosa, both in the comarca of Marina Baixa.
They found four of the illegally caught blue fin tuna, each fish weighing around 70 kilos each, which according to the officers, had been already cut up into pieces in the boats, presumably to hide them from possible detection by the authorities, in order to sell them on to restaurants at a knocked down price in the two ports.
A spokesman for the Guardia Civil said, “Normally, the fish is quickly sold to a local restaurant who buys it at a price much lower than the legal market price of around €50 per kilo, with the detriment of not knowing its origin, as well as the lack of any type of sanitary control.”
The fishermen, if found guilty of a serious breach of maritime law, could face a fine of up to €60,000.
Fishing of bluefin tuna is only allowed at certain times of the year, when authorised vessels are allocated a quota, and it is currently banned, only allowed by the Ministry of Agriculture, Fisheries, and Food, and the seized tuna was donated to a local food bank after it had been checked over and passed quality control tests.
The Euro Weekly News is running a campaign to help reunite Brits in Spain with their family and friends by capping the costs of PCR tests for travel. Please help us urge the government to cap costs at http://www.euroweeklynews.com/2021/04/16/ewn-champions-the-rights-of-brits-in-spain-to-see-loved-ones-again/