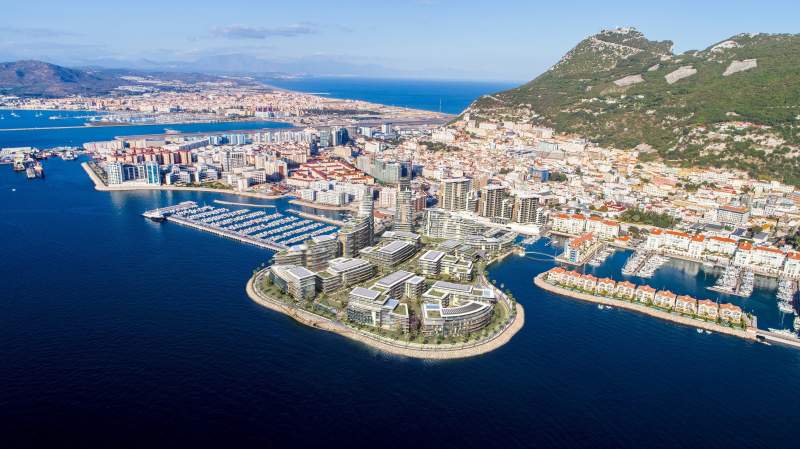 THE development project is being undertaken by Harbour Developments Limited, a consortium made up entirely of locally-based developers. This comes as Gibraltar announced today, May 16, it was free of Covid for the first time in 10 months – just one day before travellers from England are allowed to resume foreign travel.

The reclamation, situated in a prime location to the West of Coaling Island, aims to create up to 60,000 sqm of new land area. This new land will provide approximately 100,000 sqm of residential buildings with leisure, community, retail and commercial use for a wide spectrum of local needs.

The land created will provide for the sustainable growth and expansion of the city of Gibraltar on the western side of the Rock, inside Port waters, for the next decade, much as the reclamation carried out by the GSLP did in the late 1980s.

In consideration for carrying out the entire reclamation at practically no cost as the contractor for the government, the developer will be granted a lease for 50 per cent of the northernmost side of the reclaimed plot.

The reclamation costs will be financed by a government owned company on a fully secured basis using funds raised from the £300 million institutional investment in Gibraltar.

Gibraltar’s decision to restart the project, which was previously halted by the Covid-19 pandemic, has greatly angered the Spanish government who firmly believe that the waters surrounding the rock belong to them.

THE TERRITORY YIELDED BY ARTICLE X OF THE UTRECHT TREATY

Spain managed to limit the yield to the territory effectively occupied by the British armed forces in order to prevent any extension of the previous jurisdiction of Gibraltar over the small neighbouring territories and the claim by the United Kingdom of the powers, the properties and the privileges recognised to the town when it was under Spanish sovereignty.

The concern of Spain to carefully confine the yield only to the territories militarily conquered and enclosed within the fortified area was acknowledged by the British negotiators in Utrecht, who fought with determination for “the matter of the extension of the territory around Gibraltar,” admitting the frontal refusal of Spain to yield anything other than the town and the fortress of Gibraltar, including the ground around the Rock.

The Spanish negotiators were not worried by the loss of the Rock and its adjacent waters, but by the broad territorial jurisdiction exercised by Gibraltar over the region in order to exclude the possibility of the projection of such jurisdiction over the adjacent territories.

Victoria Keys is the vision for a new innovative, urban district in Gibraltar. The vision, to create a new and vibrant community for both residential and commercial purposes.

Set within the harbour on reclaimed land, Victoria Keys is made up of new homes, cafes, restaurants, and cultural and commercial spaces. Surrounded by extensive landscaping, we envision Victoria Keys as a much-needed leisure destination for the residents of Gibraltar – a place to relax and unwind. The district’s close proximity to the old town will strengthen the urban feel but offer a less intense environment. A new seawalk and maritime park will provide residents of the Keys a daily retreat from city life and a place to reconnect with the natural surroundings; a peaceful haven in an urban setting.

The project, by MGA, is in partnership with our London-based sister company, Geddes Architects. Both McLundie and Geddes have worked to master plan this 120,000 m2 residential and mixed-use project.