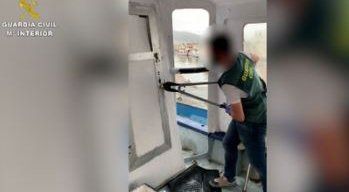 Nearly 4 tons of Hashish Recovered in Spain’s Almeria.
Eight people have been arrested and nearly 4 tons of Hashish have been Recovered in Spain’s Almeria.
The Guardia Civil mounted two operations named Mauritania and Fischer. In total they were able to arrest eight people for offences of trafficking drugs and seized a staggering 3,960 kilos of hashish between the two operations.
As part of Operation Mauritania the Guardia Civil focused on beaches between Aguadulce and Roquetas de Mar after they became aware of a drug smuggling organisation. The Guardia Civil organised the operation in order to seize drugs and attempt to arrest those responsible for smuggling hashish on the Almeria coastline.
Officers swooped in after they saw that a boat was travelling at low-speed and was headed towards Almeria’s Ventilla beach. Officers had seen multiple people waiting on the beach who they suspected could be waiting for the boat to arrive in order to transport drugs that the boat was carrying.
Officers from OCON-SUR and the Almeria Command witnessed a lorry as it fled after the drugs had been unloaded. They followed in pursuit of the vehicle and three people were seen to get out and flee on foot. They were that determined to escape that they left the lorry to crash into building.  Serious damage was caused by the crash in Roquetas.
As part of this operation some 1,680 kilos of hashish were recovered and a total four arrests were made.
The Guardia Civil’s Operation Fischer focused on drugs being smuggled into the port of Roquetas de Mar. In total four people were arrested and over 2000 kilos of hashish were seized as reported Almeria 24.