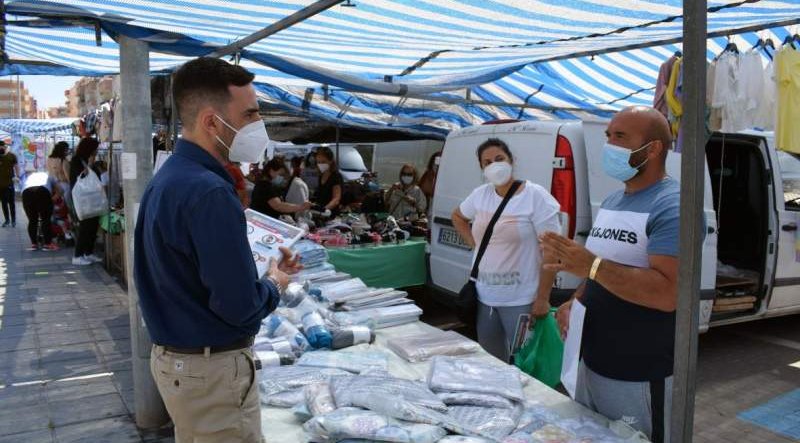 Markets open ALMERIA CITY’S seven open-air markets are now fully functioning with all stalls able to set up once more now that the city is in Level Two.   Promotions councillor Carlos Sanchez stressed that customers were assured that all health measures were in place and they could shop in safety.

Open again BERJA town hall reopened the Castala park’s picnic and barbeque areas which were closed during the State of Alarm. Municipal employees have removed traces of vandalism and the public will be able to enjoy the facilities until May 31 when barbeques are once more banned as a fire-hazard.

Similar hopes RAMON FERNANDEZ-PACHECO, Almeria city mayor, visited La Chanca primary school after reading about pupils’ post-pandemic wishes in a recent International Families Day initiative.  Fernandez-Pacheco assured them that despite the age difference, their hopes of removing facemasks, re-meeting relatives and being able to travel were no different from his.

School days ANTONIO JIMENEZ ROSALES, the regional government’s Schools and Sports delegate, announced that the Junta plans to spend €429,915 on improvements to the Residencia San Jose, a state boarding school in Velez-Rubio.  This will bring the building into line with current regulations regarding accessibility and evacuations during an emergency.

Crash course GUARDIA CIVIL officers in Aguadulce followed a lorry they suspected was carrying a consignment of drugs until the driver, aware that he was being followed, crashed the vehicle into a Roquetas building. He and two others fled, abandoning 1,680 kilos of hashish, but were later traced and arrested.

Testing time The first phase of physical tests for the candidates for four vacancies on Adra’s Policia Local force was held earlier this week, with the second round scheduled for Friday 21.  This will be followed on Monday, May 24 by another round for those who passed the first two.

No problem SERON experienced one of the first fires of the summer in the Los Marteses district last Sunday but rapid action by Infoca, the Junta’s forest firefighting service, controlled it within minutes as nine firefighters and an environmental officer successfully battled to prevent the blaze from spreading.

Armed forces   FORTY-ONE people, who included three women, were selected from more than 200 applicants who had answered a recruiting announcement by the Ministry of Defence’s Sub-delegation in Almeria. Thirty-seven of the applicants are now in the Army, with the remainder serving in the Air Force and Navy.

Stand-in  AGUSTIN CARMONA took over as Albox’s acting mayor after deputy mayor Jose Campoy took sick leave.  The latter was standing in for Francisco Torrecillas, still recovering from the aftermath of Covid after spending 51 days in intensive care at the Virgen del Mar and Torrecardenas hospitals.